Zone blocking schemes are designed to take advantage of uncertain situations by defenses that like to blitz and move their defensive fronts around as well as using their linebackers to run through and by double teams and single blocks. Basically we divide our offense into five blocking schemes, each having its on distinct style. Our blocking schemes are designed around zone concepts that require us to track and combo down defenders to linebackers. The following descriptions will describe how this is done and how we divide them into five phases.

Thus, our zone-blocking schemes will be our primary emphasis as we establish our running game. The following pages will illustrate how we do this through our Ace, Duece, and Trey combination of blocks. Our concept of calling plays is done by numbers each representing a blocking scheme.

Phase One / Numbers 1 & 0 Equals (Traps, Midline):
A zone concept that takes the offensive blocking schemes pushing backside of the point of attack. Take it back push takes place by using the near ear rule of helmet placement along with an initial “L” step by our offensive linemen and pushing our blocks away from the point of attack. Numbers to alert Take It Back: 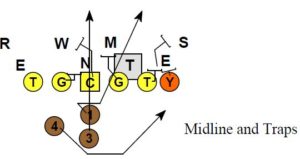 Any play called that ends with a 1 or 2 tells the offense that the play called will be some type of trap or midline scheme.

Phase Two / Numbers 2 & 3 Equals (Take It Back) Read The 5 Technique:
A zone concept that takes the offensive blocking schemes pushing backside of the point of attack. Take it back push takes place by using the near ear rule of helmet placement along with an initial “L” step by our offensive linemen and pushing our blocks away from the point of attack. Numbers to alert Take It Back:

Any play ending with the digit 2 or 3 means that the blocking scheme will be taken back and away from the 5 technique.

Phase Three / Numbers 4 & 5 Equals (Part The Sea) ISO’s:
Incorpates a fast zone counter rotating blocking scheme that we use for our ISO plays. Our ISO plays are blocked by using the term “Part The Sea” at the point of attack through the near ear. All ISO plays will be rotated away from the hole and fast rotates our offensive linemen as they track their 2nd level linebackers. Numbers used to counter rotate or part the seas:

Any play called that ends with a 4 or 5 means we are running some type of ISO. When running an ISO play the blocking scheme will push back and away from the point of attack this is the reason I use the term part the sea.

Phase Four / Numbers 6 & 7 Equals (Take It Out On Tracks) Stretch:
incorporates the stretch zone footwork. Whenever the alert word stretch is attached to the play called we will use a dropstep and get on tracks through the playside jersey number of the next defender over. There will be no hip or foot rotation with the stretch plays. Stretch takes the push by our offensive line out at an angle. Numbers used on Stretch Schemes:

Any play that ends with a 6 or 7 will be termed a stretch scheme that requires the offensive line to use a drop step.

Phase Five / Numbers 8 & 9 Equals (Circle The Wagon) Toss or Read The 9 Technique
is our fast rotating zones with the Toss and load option schemes or any play called that uses an 8 or 9 digit. What we mean by fast zone is that our offensive linemen want to come around fast with their blocks to compensate for fast flowing linebackers. With any zone the type of play called will dictate how we push the zone, fast zones require a dropstep to accomplish getting our hips and feet around fast (always have a blocker
between runner and defender). Numbers used to get play outside or Circle The Wagons:

Plays ending with the digit 8 or 9 means we are running the ball outside and will be an outside zone blocking scheme. When using the digits 8 or 9 means that the offensive line will rotate their blocks by coming around on the schemes outside.