All fake field goal attempt decisions are made by the head coach, except those made within the execution of the “gate” scheme. The holder is responsible for making the call alerting the unit to the play to be performed.

The design of fake field goals is game plan specific. They are designed to attack the opponent’s defensive alignment or create a specific match-up. The stack alignment can allow for a number of fakes. It can also stress the defense with shifts and movements.

The holder will make the call “Stack – Red” which indicates a right shift. On “go” the players will shift and guards will get in a three-point stance using a staccato move. If the defense does not jump offsides, the attempt is executed, or a fake can be run.

The “Stack 821” can be executed directly from the stack alignment, or run with a shift (Red Stack 821). The shift is an excellent play because it takes the single receiver side of the formation to trips upon the shift. The defense must either adjust, which slows the rush on an attempt, or they are running to change their alignments. In either case, the field goal team has gained an advantage.

One final point about fakes is that if your kicker can throw, you can direct snap to the kicker and the holder becomes an extra blocker. Otherwise, the snap is to the holder, and the kicker gets involved either as a blocker or receiver option. 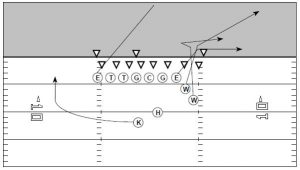 • The players releasing on routes must have eligible numbers; 0-49 or 80-99.
• The stack players must “punch” before releasing. This creates better timing for the meshes.
• The call “Red Stack 821” alerts the players to shift to the formation.

The next fake field goal is an additional one that we have used in the past: 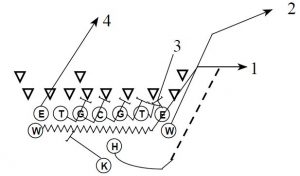 • Good call versus a team that overloads. Run the motion away from the overload.
• The right end must block before they release on the “delay”.