The quarterback read for best decision on giving the ball or keeping the ball in a one back gun option attack will be explained in the following illustrations. Remember, the quarterback is reading the end for give or keep read but, the decision to put this into an option read play is because of
the outside invert. With this scenario there is no invert so the gun option read is on.

With this scenario from a Doubles set the outside invert is now occupied by the 4 Back. Thus, the quarterback can keep this as an option read play 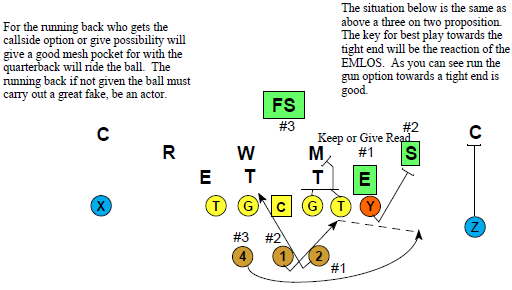 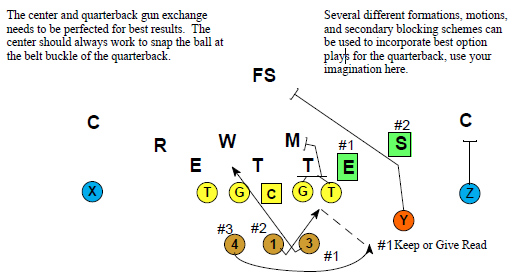 Cowboy the Pitchman from a Slot Formation

The Cowboy technique has the pitchman taking one step forward with his outside foot and then a 45 degree angle step with his inside foot to work into the proper pitch relationship.

When aligning in a formation that gives you a slot to either side you can audible into best play depending upon the read by the quarterback thus, either slot could possible cowboy into a pitchman our into the convoy screen.