One of the most important areas in determining secondary coverages is the middle of the field about fifteen to twenty five yards deep and about two yards inside each hash. This area is known as the SQUARE. 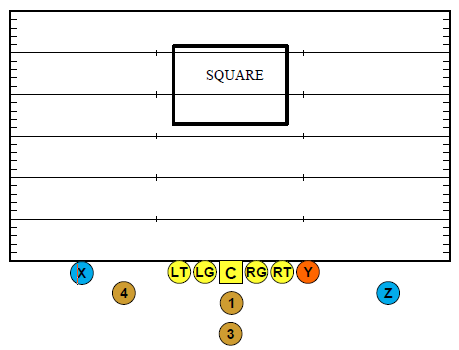 In reading the square the quarterback simply looks down the middle of the field. The quarterback should not focus on either safety but see them both in his peripheral vision. 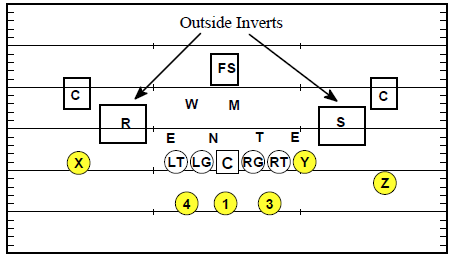 The illustration below appears to be a cover two or cover four based upon the missing invert towards the openside. The concept of reading outside inverts is an easy method for pre-snap coverage. 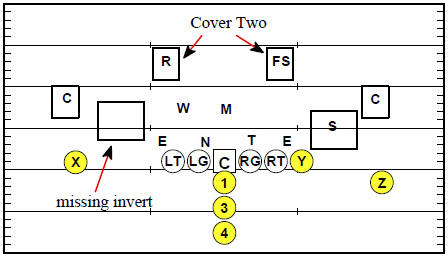 The three deep is generally played behind some type of eight man front defense. Normally in a Under or Solid front scheme.

It is usually easier to determine the basic coverage in a three deep scheme before the snap. This is due to the fact that there are only three defensive backs and to get variations in their coverages, they must cheat in one direction or another to get to their responsibilities.

In the example below below, it is safe to assume the coverage will be three deep with very little chance of a roll or cover 2. This is because of the alignment of the safety and Rover. It is obvious the the Rover cannot cover different areas on the field.

The basic adjustment this defense gives is the ability to roll or play cover 2. It is easy to move the Rover out to the open side and rotate the Free Safety to the Flanker side. 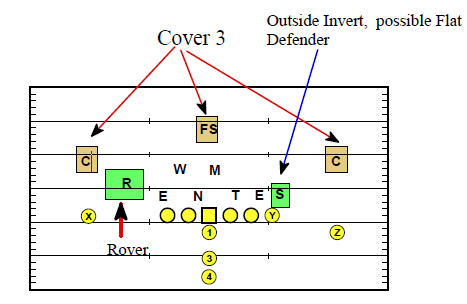 Understanding Red Zone Technique / Minus 20 and In.

Red Zone is that area on the -20 and in. Red Zone puts the defense with their backs to the wall. An offensive goal that most teams have is to score every time inside the Red Zone. Once a receiver has moved into the Red Zone territory, a defense will slow down their drops in zone or man technique. 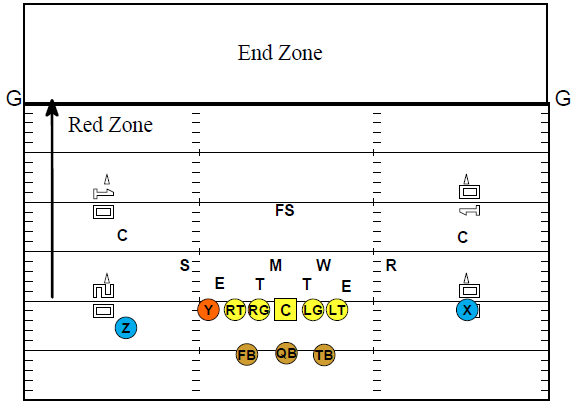 Philosophy of Red Zone technique is to never allow a receiver to the defender to end zone. If a receiver catches a pass in front of a defender in the end zone, it is a touchdown no matter how hard the defender hits him. The defense wants the ball thrown over the secondary defenders, or thrown
like a bullet between the defender and receiver if we are in zone coverage. If the offense has to throw a bullet, it had better be right on target or it’s intercepted. No matter what coverage the defense is in, the defensive philosophy is to “Keep the Receiver Behind Them”.

Remember, the width of the field never changes, but the distance to the goal line is constantly changing. The closer the offense gets to the goal line, the vertical field shrinks. The offensive philosophy must change to utilize the space available. The offense must either throw (quick fades,
slants, outs) or they must utilize the width of the field with picks and crossing routes.