ISO’s:
Incorporates a fast zone counter rotating blocking scheme that we use for our ISO plays. Our ISO plays are blocked by using the term “Part The Sea” at the point of attack through the near ear. All ISO plays will be rotated away from the hole and fast rotates our offensive linemen as they track their 2nd level linebackers. Numbers used to counter rotate or part the seas:

Any play called that ends with a 4 or 5 means we are running some type of ISO. We have when running an ISO play the blocking scheme will push back and away from the point of attack this is the reason I use the term part the sea.

Quarterback and Tailback Footwork From The “I” Back 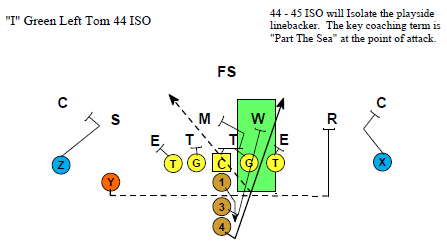 Whenever we have a Tailback play or a 40 series play the quarterback will open up at a 45 degree angle to deliver the ball to his Tailback. The Tailback on all 40 series plays will also open up at a 45 degree as well this, allows the quarterback to get the ball one step deeper to his tailback which allows the Tailback an easier cutback if the front side of the play is plugged.

Arrows on the defensive side of this illustration indicate the angle of push by the offensive line that will create the backside cutback by the Tailback if needed. 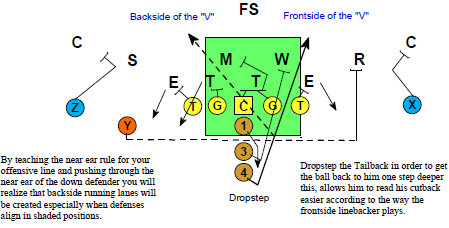 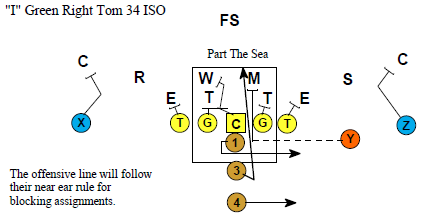