The predominant protection scheme used today is the “spread punt” where the long snapper and personal protector have the A-gap. The track to the block spot is vertical, and then bends to the block spot. As such the middle pressure approach is tailor made for the middle return. The mirrored alignment can stretch (horizontally) the protection and will provide excellent attack angles for the schemes. The goal of the middle return is to divide the coverage left and right, opening up a north-south lane for the returner. Therefore, the base scheme is a pressure-hold up, and middle return which we call “Jesse James”. The reasons include:

• The best punt block teams are usually good return teams because it quickens the punter’s rhythm to create shorter punts, line drive punts and shanks. The punt team must spend more time on protection and be slower to release into coverage.
• This is an easy scheme to teach and practice since the players can work on their skills individually, and starts with the 3-point punch which our players work on every day.
• This is a north-south scheme, so there are fewer negative plays with returners trying to hit the wall, or blocks in the back.

The following is a recap of our base punt returns schemes that come after pressure.

• Jesse – after Jesse James is used with middle pressure and a middle return using a “punch, wheel and shadow” blocking technique. This style of return, though designed to initially hit the middle, can turn into a sideline return. This is our base scheme.
• Wyatt – after Wyatt Earp is used with pressure from the right (eaRp), but a picket return opposite the pressure. We add an “orange” for a pressure left, return right.

Key coaching points for the Jesse James return include:

• Sell the rush – make everything look the same as a block with the get-off, low pad level and then track to the block spot if you break clear.
• Transition – when you feel the blocker coming to you to make contact, shoot your inside hand to the blocker’s breastplate to balance up.
• Hold-up – Time equals yards. We give our returner the maximum fielding cushion by delaying the release of the coverage. Keep a wide base with the hands inside on the breastplate of the blocker; hands above your eyes; shuffle your feet to maintain position. Block him where he wants to go – further than he wants to go. Release him outside if, possible, but not critical.
• Trail – After the release, run on the hip of the opponent. If you lose him on his release downfield, run a midpoint path between your man and the returner. Focus on the hip as you get to the returner so that you may see him come to balance.
• Fit and Finish – When the cover man comes to balance to the returner, shoot your hand across his inside pad and reassume blocking position. Turn your hips inside to make him go over the top of the block. 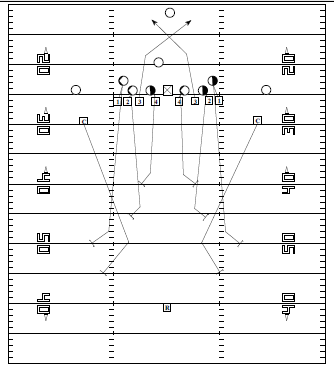 • Each player must know where the block spot is.

• Any player that breaks clear heads to the block spot.

• Excellent versus fakes because each player is putting their hands on an offensive player.

• Pull #2 out early to help with a gunner on either side. 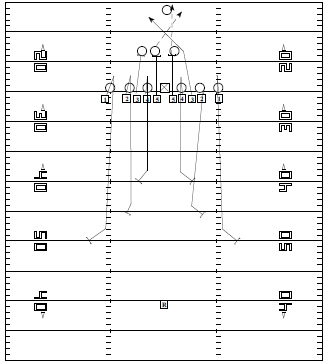 • The base alignment versus a “big butt” is adjusted to attack the gaps for a middle return.

• Defenders in the gaps are based upon the game plan.

• Players that get through will use the punch, wheel and shadow on the “shield blockers 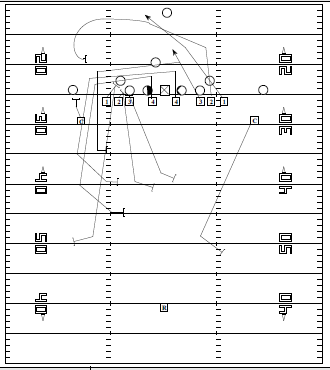 • This is a return opposite pressure.

• Returner must stay between the numbers and hash, otherwise the sideline pins them with no additional open space to work with.

• The double can be switched to block the best coverage player – wing, tackle or guard.

• Fours are responsible for run fakes.

• An “Orange Wyatt” changes this to a pressure left, return right.