This is the second part of this article: Click here to read the first part 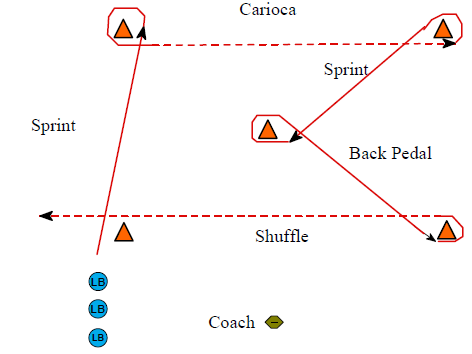 The maze drill combines sprint, parallel shuffle, backpedal, and 45 degree drop. Player begins by sprinting to cone #1, sprints around it, and then pivots into a shuffle. At cone #2, pivot into a backpedal at a 45 degree angle towards cone #3, circle cone #3 while still in a backpedal. Once coming around cone #3, turn
and sprint, at a 45-degree angle, around cone #4 then go into a shuffle. Keep feet shoulder width apart, “Z” in the knees, and chin over the knees. Finish the drill by turning and running a hard five yards, once hitting the fifth cone.

With the angle and run drill, a coach will start players with ball movement. Player takes freeze step, and then starts running with crossover
steps, while maintaining eye contact on the football.

Angle run should be at a 45 degree angle, drill is conducted between two five yard line stripes. Every time player hits a five yard line stripe, he will plant his
near foot, open his hips at a 45 degree angle, and then start the other way. Coach will signal the end of drill by the read of the ball. When coach shows all straight back, the player then will swing his hips around, and then sprint a hard five yards.

Player starts with a good two point stance; proper stance should always be reinforced at this point. Drill begins with player taking his freeze step, and then starts into a backpedal. Once reaching the end of the bag, he will sink his hips, and go into his shuffle. Player should always keep his shoulders square, and his eyes on the coach. Once into the shuffle, player always maintains a great base with feet shoulder width apart, and arms pumping; never cross the feet over. On the plant, player will plant the foot, to the direction of his movement, and drive off. Sprint as hard as possible, plant and shuffle. Finish drill by sprinting a hard five yards past the end of the bags.