Are you familiar with the expression, “living in a bubble,” which infers that you’re living in your own little world impervious to what is going on around you?

You may even have heard a similar expression, “Are you living under a rock?” to describe you’re unaware of what is happening in the outside world.

These two phrases are negative commentaries about a person solely wrapped up in their own personal life.

In sports, being in a bubble is not a bad thing.

The phrase, “performing in a bubble” refers to an athlete’s ability to block out distractions and focus on their game…

To be focused on their job…

To be immersed in the moment…

To ignore the outside chatter that messes with your mental game.

Getting into that mental state where you are totally focused is challenging.

Unfortunately, some of that outside chatter seeps into your mind, contaminating your thoughts, undermining your flow, and creating a huge mental performance hurdle.

As challenging as outside chatter may be, you can learn how to focus through these distractions.

Let’s look at a recent example in sports…

Chicago Bears quarterback Mitchell Trubisky admitted that, early in his career, negative chatter prevented him from playing at his peak.

Despite being drafted by the Bears with the second overall pick in the 2017 NFL Draft, Trubisky had difficulty blocking out the negative chatter from outside sources.

Listening to the negative outside chatter caused Trubisky to doubt his abilities even though he was a top talent in the draft.

Trubisky knew if he was to reach his potential as an athlete, he would need to learn how to prevent outside chatter from affecting his game.

TRUBISKY: “I know what that [negative chatter] did to me when I let those voices get inside. It was not good for my mental health. People are one keystroke away from accessing you. Why would I allow people who know nothing about me to have an opinion? Why would I allow them to have that space in my mind?”

Trubisky decided to not let other people’s opinions to reside in his mental space.

Trubisky realized that his athletic success is dependent upon controlling his mental chatter.

To deal with the problem of outside distractions, Trubisky created his own bubble, which he named “Zero Dark 10” (Ten refers to his uniform number).

In the space, Trubisky only allows positivity and laser focus when he takes the field to play.

TRUBISKY: “It’s important to always be in control of your time and your thoughts. You can’t let people on the outside take control. When you take away other people’s power over you, you’re in control of everything: your time, and how you’re working, and your peace of mind.”

As an athlete, you don’t want to invite distraction and negativity into your mindset. You want to take control of what you focus on and stay focused in your performance bubble.

How to Overcome Outside Distractions

Like Trubisky’s, “Zero Dark 10,” create your own performance bubble. Let the name of your bubble remind you to control your focus.

Your bubble can be an imaginary one that is around the sidelines, field, court, rink, or mat.

Decide to focus on what you can control in your sport environment–your thoughts and performance.

When you notice that you’re distracted by external stuff beyond your control, stop and refocus back to your bubble. 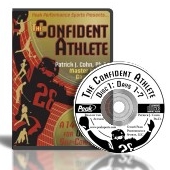 A ground-breaking system to teach you how to think like a champion and have ultimate self-confidence every time you step on the playing field, court, track, or course. This Program consists of 2 audio CD’s that include 14 days of confidence fueling exercises and a simple to follow workbook that guides you, helps you apply the strategies, and customizes the exercises to your personal needs. Each copy comes with two premium bonuses that you can download immediately!