•Base field goal or Try alignment.
•Focus, discipline and effort are keys to success.
•Linemen must watch the ball, and not react to the defenses attempt to draw them offsides. 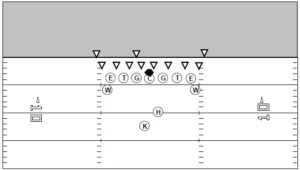 We can align in our “Stack” alignment for field goals, as well as point-aftertouchdowns. There are certain things that we like to do out of this field goal alignment, however personnel has a tremendous impact on the ability to use this formation. We have found that tight end type players, as opposed to running back type players for the stack position helps with the protection. As such, four bigger receiver type players will make this alignment more productive. 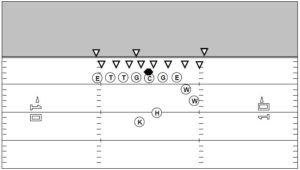 • This can be a base formation, or used as a change of pace to break tendencies.
• Align the stack to the kicker’s foot side since it is easier to push the rush beyond the block spot.
• No inside penetration.

The swing gate or “huddle muddle” has both proponents and opponents. There is no question that teams that use this style of PAT add practice time for their opponents. If teams are not prepared to defense the swing gate or the defenders have a momentary lapse, then scoring the additional points is very simple. The argument against its use is that teams are resorting to trickery to score their two-point plays, as opposed to relying on their offensive system. Regardless of which side of the argument you support, there is no question that the swing gate adds practice time and may keep your opponent from having additional practice time to put in a PAT/FG block scheme.

Since we do not huddle after a touchdown, when “gate” is called by the holder, the center will line-up one yard outside the hash mark [two yards with college hash marks]. The left end, tackles and guards align with one-foot splits, in a two-point stance at 45° angle with the goal line. The left wing will stack one yard behind the right tackle. There are some coaches that have the players align with their backs to the goal line. Either alignment facilitates the communication process.

The right end will set up over the football in the middle of the field. He is the initial snapper (“IS”) and play-caller, though the holder could be designated as the play caller. The right wing will split the distance between the hash and the right sideline, or just above the numbers, one to two feet off the ball. This makes our IS eligible. The holder will align six yards deep, offset two yards to the right of the IS. The placekicker will align at 7⅓ yards directly behind the IS. 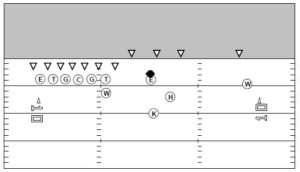 The IS will stand with the ball positioned in the middle of his body. Then based upon the call will quickly make a quarter turn (drop or stagger the foot to the play side) to facilitate an underhand toss (shovel) to the right or left. We do not have the IS snap the ball between his legs. If the actual kick will be attempted, they just turn and jog to their appropriate alignment.

The IS will watch the reaction and the alignment of the defense to the formation. It is imperative that the IS does not place his hand on the ball until he is ready to execute a play that requires him to actually snap the ball. Once he places his hand on the ball, he cannot take it off. The decision is based upon: