Pairing best option is best run to one side only, this can either be to an open or tightside. When pairing best option you will want to read the End Man on the Line of Scrimmage (EMLOS), where as Option On Me reads the outside inverts for best option. When pairing an option play it is best done by keeping the read for the quarterback to the EMLOS, if you want him to have the option to call an option inside the box then you need to keep it to “Option On Me”. The following illustrations will walk you through the steps for pairing your options.

Whenever an opponent begins to try and defend the inside veer by playing a heavy four technique, they are trying to disrupt the mesh by the fullback and quarterback while also making it more difficult for the openside tackle to inside veer release. When this happens and the five technique reduces to a four technique it allows for an easy duece to the playside linebacker by the tackle and guard. With inside veer the blocking scheme goes back and the load blocking scheme comes towards the play (note the difference between these two scenarios. With inside veer as mentioned earlier reads the five technique and the load to an openside will read the nine technique or outside defender. The pairing of these two options is an easy process for the quarterback because he only needs to look at his tackle and defender alignment for best option. As your quarterbacks start to master their audibles on option on me the openside load can be added as one of his options, taking the decision from three option possibilities to four.

Many different possibilities exist when pairing certain plays with each other. The following illustrations demonstrate the many different ways to pair the option game. The way this takes place in the huddle for example would be to call “12 or 18 On One Ready Break”. The offensive line listens for best option and responds with their line calls accordingly. 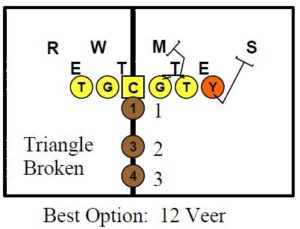 When pairing 12 and 18 together towards the tight end best to run 12 because of the deuce combo and no one gets single blocked. The triangle is broken. 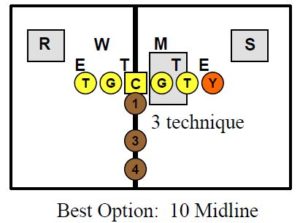 When pairing 10 with 18 and the defense gives you a 3 technique to a seven technique best to run 10 midline. If checked to 18 you get a possible mismatch with the guard and three technique vs a base block. 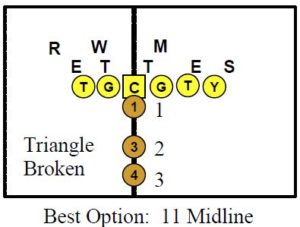 Can pair 10 with 11 just find the three technique. If checked to an openside it turns into an Army scheme. 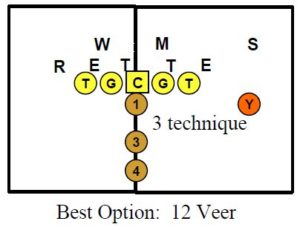 When pairing 12 and 13 together with two open ended sides find the five technique and run veer to that side. 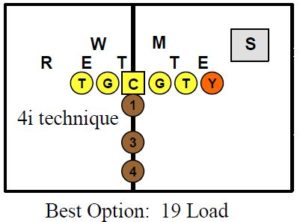 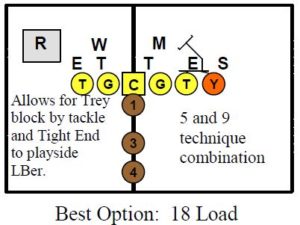 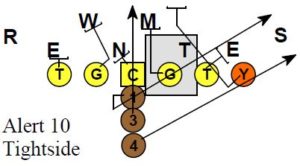 With the paring of 10 – 18 towards the tight end you are looking to keep your offensive line in best case
scenerio which presents the midline because of the 3 technique. 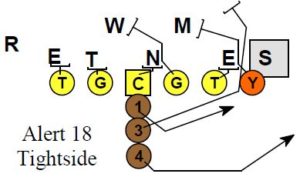 Pairing 10 – 18 in this illustration gives you 18 Load because of the 1 technique. 18 Load gives you two combos by the offensive line (Trey, Ace Ram) which limits any up field penetration by the defensive front. 18 Load allows you to counter rotate the blocking scheme. 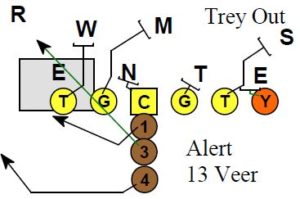 Pairing 13 – 19 towards the openside. Because your quarterback sees a 5 technique he will alert 13 Veer.
Veer is best run to a 1 and 5 technique. 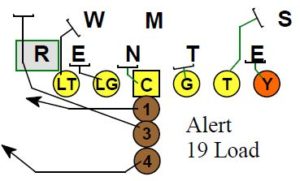 In this situation pairing 13 – 19 the defense is trying to defend the veer so they moved their defensive to a 4i technique so your tackle can’t inside veer release. Thus, setting up the openside. Load that allows your offensive line the ability to bring the blocking scheme around. 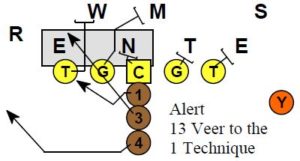 Pairing 12 – 13 Veer with an offensive formation that offers to open ended sides as illustrated here gives you a good opportunity to run the veer. Since the inside veer is best run to a 1 technique your quarterback would check you into 13 veer. Veer to the 1 technique is best case scenerio for your offensive line 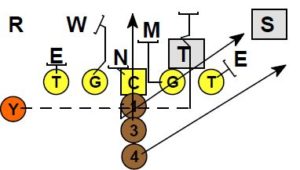 This illustration pairs 10 – 11 or midline with a slot formation that will allow you to motion your tight end. Here the quarterback reads the 3 technique to his right side so he checks the offense into 10 Jill. Your tight end will motion over to his right and will become the second tracker with his guard.