A kickoff is a form of defense.  The “directional kick approach” is designed to control the return possibilities.  However, regardless of how well the kicker executes his techniques, the key to a successful kickoff is the coverage.  The reason is that no matter how well alignments are disguised, or where the ball is kicked, unless the coverage is good, the kickoff will not be successful.

As noted above, there are some approaches to coverage that use “run & read zone”, “avoidance zone” and “contact zone”.  This can confuse some players, so our basic coverage philosophy is to avoid early, run through late. The technique of “avoid” is avoiding all blocks to the tail of the opponent, and then get back into your lane.  This would be in the first twenty yards for Bullets, and first thirty yards for the Alleys.  The technique of “run through” is to attack and play through all blocks.  When defeating a block, the player cannot get caught on a side of the blocker.  This opens up running lanes for the ball carrier.  The players will run through, staying square.

The spacing of the coverage team in relation to the return team, along with the speed of the play, makes the kickoff the most aggressive play in football.  However, even though the kickoff requires physical aggression, it also requires the players to be mentally tough and use proper technique.  The teaching process includes: (1) Kicker – directional kicks, (2) Get Off – speed down the field, (2) Defeating a Blocker – adjustments to the ball, and (3) Open Field Tackling – close and tackle.

Many coaches look for a kicker who can kick the football into the end zone – consistently.  Reality check!  We look for a kicker that can perform, or will work on perfecting our directional kicks.  Consistency is an important element in our coverage schemes.  When we can count on our kicker to kick the ball, with the acceptable hang time, to a specific location we have the advantage because we are coaching our coverage players to converge to a specific spot and adjust to the ball carrier.

We use a “form start” five-yards behind the ball.  Every player in our program knows how to get into this stance because we practice it year-round.  The feet are narrow (“inside shoulders”), with a stagger of six to twelve inches.  The drop hand is directly down from the shoulder, with the thumb and forefinger supporting the stance.  The shoulders are aligned in front of the hand.  The hips are elevated, higher than the shoulders.  The back should be flat.  The head is up, with the eyes focused approximately two to three feet in ahead.  This stance puts the player’s body in a pushing position that allows them to accelerate very quickly.  As the kicker yells “ready”, begin to count 1001, 1002 and then drive off the balls of the feet, completely extending the ankles, knees, and hips while driving the off arm to propel the start.  It is this stance that allows us to align five-yards behind the ball, versus the traditional ten-yards. 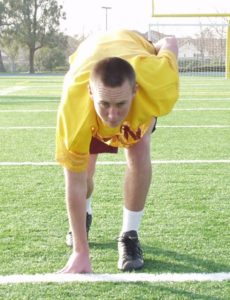 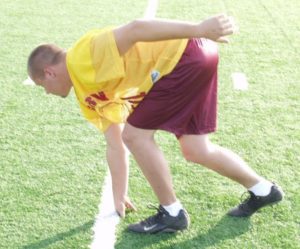 As the coverage team closes the distance between themselves and the first wave of blockers, they must set them up so they can avoid them, and get back in their lanes by the butt of the blocker.  This can be accomplished by swerving or weaving using head fakes in the run.  These can begin within seven to eight yards from the blocker.  The coverage player is trying to get the blocker to stop their feet, adjust their course or crossover compromising their base.  As the coverage player closes the gap, they can widen their running base allowing them to go in either direction.  Also, a swim or rip technique can be used.  If the blocker appears to be in balance, feet stopped, then run right by him without any moves.

If the blocker makes contact, attack him with a three-point punch.  This should get him off balance, as the coverage player should be attacking with speed.  Get the hands on the breastplate of the shoulder pads.  Drive the blocker back into the return until you see the ball.  Then use a push-pull technique, ripping off the block to make a play.

The following is a brief list of coaching points when discussing kick coverage: