Punt blocks are the result of missed blocking assignments that typically come through a gap. The closer the gap to the ball the shorter the distance to the block spot. Therefore, the blocking scheme must be simple so that there is no doubt as to which blocker has whom, with an emphasis to protecting the inside gap. This is why we use a man blocking principles that adjust to a zone scheme.

COACHING POINT: Make sure that you are playing players that will allow you to get your punt off. It may be wise to sacrifice some speed inside in order to block the return team’s rushers.

There should never be any confusion in the front eight as to who their man is since we use a man-blocking scheme based upon a numbering system. Every player has defender that they must account for before they get into coverage. We will adjust to a zone scheme when the return team aligns with five potential rushers off the LOS at less than 3-yards. The Protector will identify those situations with a “soft” call added to his blocking scheme call. In addition, if there are three rush men outside the wing and tackle, the wing will add a “wide” call.

The interior blockers are in a stance with the inside foot (foot closest to the ball) up, with their weight on the inside foot. They will watch the ball out of the corner of their eye, not the defenders. When the ball is snapped, they will execute inside-outside-inside (“IOI”) footwork working to maintain inside leverage on their defender.

COACHING POINT: Setting the guards and tackles off the LOS, with their helmet breaking the plane of the center’s belt will allow them to see the snap while keeping their shoulders parallel to the LOS. Keeping the interior seven square to the LOS helps to widen the protection cone, creating a longer distance for a punt block scheme off of the edge.

The interior blockers stance should put the players in a football position (inside foot up) with a slight bend in the knees which will lower their hips and keep their pad level down. The shoulders should be parallel to the LOS. The blocking technique is IOI. 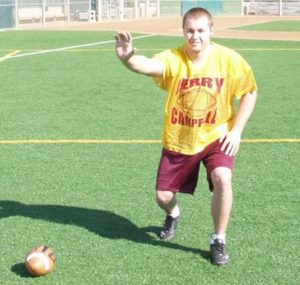 1. The first step is with inside foot, six inches (6”) inside to parallel with the stagger foot. As the blocker steps back, they will punch to the inside gap with their inside hand if there is a threat. Specifically, the guard must work with the center because the center is at a disadvantage – snap first, protection second. 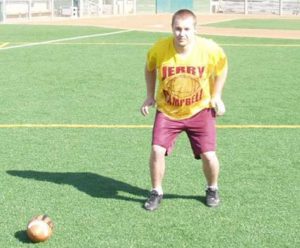 2. The second step is with the outside foot forward and both arms should load; putting the “guns in the holster”. 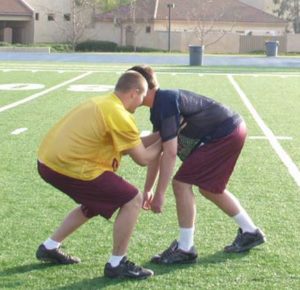 3. The third step is the finishing step with an inside foot. The blocker will punch with both hands striking a blow to the top of the jersey numbers of the rusher. The force must stop their forward momentum and push the rush defender out of the inside gap. The blocker’s shoulders may be slightly turned out to push the defender outside, which creates a wider protection cone. This also helps the blocker to release into their coverage lane.

The IOI blocking technique allows us to maintain uniformity (constant relationship) in our depth and split relationship. When the defender is in the strike zone (has crossed the LOS), punch the inside numbers (torso) forcing the defender to the outside; i.e., protect the inside gap. The force of the blow must stop the defenders forward motion. Do not chase a defender, use the IOI footwork to be in position to strike the defender if necessary.

Wings will block number one, unless executing “soft” in which case they hold off (or punch) two and block one. If there are two (2) defenders over the Gunners, the Wings must call “WIDE” so the line can count accordingly. The Wing must keep his eye on number one to make sure he does not sneak in from the outside for an attempted block (“creeper”). The Wings must release using a 15-yard arc for 20-yards and then close to the ball.

Tackles will block number two, unless executing “soft” in which case they hold off (or punch) three and block two. The Tackles must release using a 10-yard arc for twenty (20) yards from the LOS. This distance can be adjusted based upon the distance of the punt, or if delayed into coverage. Find the ball, the close and make a tackle. Do not assume that a teammate is going to make the tackle.

Guards will block number three, unless executing “soft” in which case they hold off (or punch) four and block three. The Guards must release using a 5-yard arc for twenty (20) yards from the LOS. This distance can be adjusted based upon the distance of the punt, or if delayed into coverage. Find the ball, the close and make a tackle. Do not assume that a teammate is going to make the tackle.

Long snapper (“center” or “snapper”) will make a perfect snap and block four (in a balanced front) to the side directed (Reno-right; Vegas-left) by the Protector. The center will block number five to call side against an over load front. The center can never back up. The optimum snap is .8 seconds or better. The Center will release directly to the ball. They must keep the ball carrier directly in front of them. The center and gunners should create a “net” around the returner as they are catching the punt.

The Protector will align at five-yards and make the Bomb Squad calls, either blocking scheme or fake. The protector can vary their alignment by moving to the overload side or move on the snap. By varying their alignment, the protector can help disguise the protection schemes. The Protector must block number four away from the call (Reno-right or Vegas-left) in a balanced situation, or number four to the callside in an overload situation. Otherwise, upon the snap take one step forward and block the most dangerous rusher. NEVER BACK UP! The Protector is the safety defender to the side of the punt. He should maintain five yards of inside leverage on the ball carrier.

Gunners will release quickly and go to the ball! They must make the tackle. Remember the returner must be given the opportunity to catch the ball. The Gunners must make big plays – great tackles, recovering a muff, forcing a turnover, or downing the ball inside the five (5) yard line.

The release must be with a burst, driving low and hard using a “rip” or a “punch” move when needed to get free from a defender. When there are two defenders, make a “wide” call to alert the wings of a potential creeper and widen your split another two to three yards. Release down the line-of-scrimmage, on the snap, working to get the inside defender to turn his shoulders, and then use the burst to release. Do not let the defender(s) grab you; get their hands down with either the “rip” or “punch” move.

• Rip – reduce the shoulder nearest the defender giving them less surface to grab. Reach to the hip (“back pocket”) to get maximum force, then rip through the defender (“rub the body”) lifting the rip arm above your head (“kiss the bicep”).
• Punch – square up with the defender using your hands or forearm to slap the defenders hands, getting them down. Then grab the near shoulder pushing or pulling the defender to turn him as the near hand drives over the defender’s near shoulder.

In coverage, never follow the same color down the field. The Wings and Tackles can switch assignments. We will generally “switch” when our opponents utilize a middle return. When running downfield, as defenders approach, run through them keeping your head back and eyes up. This is accomplished by leading with the hands and arms, keeping the head up and back running behind your pads.

Do not forget to practice bad snap drills with your punter. Upon a bad snap, the punter must try to recognize whether they have time to pick up the ball or just fall on it. If the punter can pick up the ball they must try to turn back toward the LOS and execute a punt on the run. Also, you must talk with and drill those situations where you want your punter to pick-up the ball and run out the back of the end zone. It is a penalty for your kicker to kick the ball while it is rolling on the ground. Finally, drill those “tight” punt situations where you want your punter to take a safety; i.e., to catch the snap and step out the back of the end zone.