The principle advantage to using a spread punt alignment is that it spreads and exposes the return team’s intentions. It is important to change your blocking schemes periodically to keep your opponents from zeroing in on a punt block scheme. The kicking spot is no closer than 10-yards from the snapper, so we line the punter at 14-yards. This helps our snapper get the ball to the punter a little quicker since the ball is traveling one less yard. We want the punt to be off in less than 2.0 seconds (1.75 to 1.95 – optimum). If we are having trouble getting the ball off in less than 2.0 seconds, we can move our punter up to 13-yards and use a two-step punt.

Coaching Point: We test our players twice a year in the 10/40-yard dash, proshuttle, dot drill, jump rope (1 minute) and vertical jump. We obtain the 10-yard dash time as part of the players’ 40-yard dash by positioning a coach at 10-yards and getting the time as they pass by. The average high school player can run 10 yards in approximately 1.5 seconds. This is a base time that we use in developing not only our “protection cone”, but in determining our punt block schemes.

The Bomb Squad lines up on the ball without huddling. This is an additional way we add stress or confusion for the return team. The Bomb Squad will be called to the “special teams” box on third down and will be sent into the game, with scheme to be executed. This allows us to wait until after the ball has been signaled “ready for play” before we have to send the Bomb Squad onto the field. This slight delay, can give the Bomb Squad an advantage if the opponent needs to make personnel changes.

PERSONNEL
Inside seven (7) should consist of aggressive football players that can run and make tackles – fearless with a great desire to succeed. The long snapper (“center”) will set the alignment by taking a stance that will (1) allow him to snap the ball, and (2) slide after the snap to block his defender, or release up the field. The guards, tackles and wings will take a 2-point stance and align as follows: 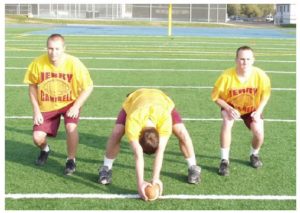 STANCE
• Feet are shoulder width apart, taking a heel-toe-stagger with inside foot up; and
• The hands set lightly on the thigh pads with shoulders parallel; i.e., keep the chest big and eyes up to scan the defense. 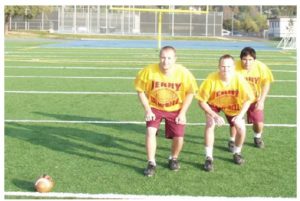 • Guard and tackle splits are 12 to 18 inches (12” – 18”). The guard’s helmet must break the plane of the center’s belt (or bottom of his numbers); i.e. set off the line of scrimmage (“LOS”) as far as legally possible.
• Tackles will take alignment parallel with the guards.
• The Wings will place their inside foot to the outside foot of the tackle. To insure proper depth, the Wing should be able to reach out and touch the tackle on the hip.

We will use an 18” split versus a team that does not typically pressure the punt. If we are using an 18” split, and the team shows pressure, then we will reduce the splits. The Protector must give the interior linemen time to move and re-set. Remember, the interior seven, except the center after they have placed their hands on the football, can move because they are in a two-point stance.

The alignment of the guards and tackles in relationship to the center creates separation between the rush and the line; i.e., widens the neutral zone. This becomes beneficial when executing a zone drop because it allows the players to see the rush. When the players can see the rush, they can pass off or switch all twists by the rush team.

As noted above, the Wings will place their inside foot to the outside foot of the tackle. To insure proper depth, the Wing should be able to reach out and touch the tackle on the hip. The combination of the interior sevens alignment provide the width of the protection cone. The wider the cone, the longer the block point is from the edge.

Gunners should be defensive backs, running backs or physical receivers. They must possess speed, be athletic and good open field tacklers. Gunners must always be around the ball, whether making a tackle as the ball is caught, or downing a ball before it goes into the end zone. 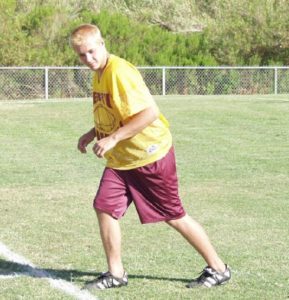 • Gunners are twelve to fourteen (12-14) yards from the ball, but no closer than 5-yards from the sideline. The closer to fourteen (14) yards the better. This will keep the corner from taking a risk and sneaking in at the last possible second (or before a fake could be called) and trying to pull off a block.

• Gunners use a two-point stance with the outside foot back; i.e., mark the LOS with the inside foot. Look in to the ball to view the snap. The Gunners must be on LOS.

Protector will typically be a quarterback because they are used to looking and evaluating the defense (“pre-snap reads”). Also, by using the quarterback as the Protector, you have more flexibility in running fakes.

• Protector will line up five (5) yards deep, initially in the A-gap, protecting the punter’s kicking foot. Do not back up!! The Protector may need to move to the opposite side based upon the directional blocking assignments or overload situations.
• We will vary the Protector’s alignment, left and right, to add some confusion to the tendencies in our scheme.

The Punter will be fourteen (14) yards deep, directly behind the center. Punter takes a shoulder-width, staggered stance (toe-to-instep) with his kicking foot back. The punter should work on both a two-step and three-step punt approach. Regardless of the steps, the kicking spot should be no closer than 10-yards from the LOS, with the punt off in 1.75 to 1.95 seconds. The punter releases slowly down the field, keeping his eyes on the ball. The Punter is the safety away from the kick, so maintain five-yards of inside leverage on the ball carrier.

Here is a diagram of the Bomb Squad’s alignment:

Some teams will align their wings one to two yards deep, as opposed to arms-length depth. This alignment is used by teams that are zone blocking and using a kick-slide to execute their blocking technique. The reason they move their wings back is to set them at the top of their kick-slide. The wings must stay disciplined in this alignment, and not chase wide defenders.

NUMBERING THEORY
The Protector will count the return team’s front, beginning on the left side. They will not count the defender aligned over the Gunner, so the next defender inside becomes No. 1. If the return team does not defend either Gunner, the Protector will make a “309” call and quickly yell “ready”. The ball will be snapped to the Protector who will throw the ball to an uncovered Gunner who is making a slow release up field until they catch the football. There should always be at least one defender over the Gunners. Again, if uncovered make the “309” call.

Generally, the rush will consist of or give the appearance of eight players along the LOS. Any time there are only seven players in the box, we must know where the eighth man is. The box consists of an area from wing to wing, from the LOS to 3-yards deep. We will not count a player if they are not in the box; i.e., at a depth of four yards or greater.

A recap of the numbering system is as follows:
• We number the rush team from the outside to the inside on each side of the long snapper.
• We do not count the defender over our gunner, unless there are two defenders aligned over the gunner. Then we will count the inside defender as “one”.
• If a defender is off the LOS, but no deeper than three yards, we add a “soft” to the blocking scheme call. This call alerts the interior blockers that they may need to execute their zone scheme.
• If a defender is more than four yards off of the LOS, we do not count that defender. If there is doubt or the defenders are moving up and back (“prowling”) – count them. The blocker that spots the prowling will yell “alert”, alerting his teammates to a possible stunt or twist.