Special teams play, by definition requires every player to possess or use a special talent or gift. As we have detailed through this manual, players with great hand-eye coordination, the ability to play in space, or the gift to catch the ball on the move are just some examples. However, there are three position players that must be able to execute the fundamentals of their position for the entire unit to have success. These include the long snapper, the holder and the returners.

GRIP
The grip is two-handed. The dominant hand is placed on the ball in the same manner as a quarterback grips to throw a pass. The back third of the ball is held in the fingertips, with the ring finger between the second and third lace from the end. The position on the lace may vary based upon the size of the player’s hand, but the thumb and forefinger form a “V” behind the nose of the ball. The ball is held in the fingertips, not pressed back into the palm.

The off hand is placed on the opposite side of the ball, on the lower third of the football. However, some long snappers like to put the off hand on the upper third of the ball, surrounding the front nose with both hands. This is a matter of preference, though it is more difficult to make the ball spiral with the hands at the same level. 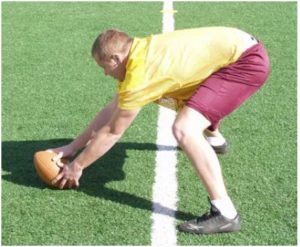 The stance begins with the feet. The feet should be wider than the shoulders, but still allowing the snapper to have full foot in contact with the ground; i.e., not so wide that the weight is on the inside (arches) of the feet. The weight should be evenly distributed over the entire foot with the toes slightly pointed out. The knees should be comfortably bent, slightly inside the ball of the foot. This position keeps
the snapper in balance, and allows them to have an excellent follow through. If the feet are set too wide, the knees will bend too far inside the feet which will make it more difficult for the feet to slide back toward the punter or holder.

The nose (backend) of the ball is aligned with the chin, approximately 12 to 18 inches forward. This distance will vary based upon the snapper’s arm-length. The football is tilted with the front nose up, which is accomplished by contacting the back third of the ball with the ground. The direction of the laces is a matter of preference; they can be pointed directly at the ground, or within a quarter turn toward the dominant hand.

FOLLOW-THROUGH
Transferring the weight from the foot to the heels while lowering the hips starts to start the snap and subsequent follow-through. If the hips rise, misdirected snaps will occur. As the hips lower, both arms are fired straight back at the target keeping them as straight as possible. The momentum of the arms firing will naturally slide the feet back 2 to 4 inches. If the snapper does not keep the weight evenly distributed over the entire foot, the force of the arm movement will push the weight forward to the toes, instead of backward to the heels. When the weight moves to the toes, the hips will rise and a misdirected snap will occur.

As the arms move through the triangle created by the feet and crouch, throw the thumbs directly toward the target. The force of this action will cause the wrist to also point to the target, and as the ball is released should put the palms facing up toward the sky. The wrist snap is the single most important aspect to getting the football to spiral and it is spiral that keeps the football on the proper trajectory – in essence the accuracy of the snap.

Coaching Point: Velocity will develop as the snapper’s technique becomes more efficient. The key points include, throwing the thumbs to the target and accelerating the heels backward.