As you prepare your defensive line drills, you must keep a certain mentality in mind while conducting the drill. Defensive linemen have one of the most important assignments in football, and is predicated on their ability to rush the passer, or get to the ball carrier.

Main ingredients for a good defensive lineman, is the need for quickness and determination. Areas of consideration when conducting your drills:

1. Speed: A defensive lineman must have excellent foot speed. He must always keep his feet alive and moving.

2. Acceleration: Initial quickness must always be emphasized. The desire to accelerate on movement of the football is the principle athletic trait a
defensive lineman needs. Areas of concentration will be to accelerate, react quickly, and develop good physical coordination. If a blocker is quick enough to get his hands inside the frame work of the defensive lineman’s numbers, and get his elbows locked on him, forget it; the defender will not get the passer.

5. Toughness: A defensive lineman must not be denied. How will he react when playing against a bigger, and stronger, opponent?

6. Inside Power: A defensive lineman must be able to control the line of scrimmage.

1. Stance – A defensive lineman must have good body position with proper weight distribution in order to be able to move instantaneous with either the snap of the ball or movement of an offensive lineman (mirror step).

3. Movement – The ability to move instantly on the snap of the ball,  or movement of an offensive blocker is key, in order that your defensive lineman may engage his blocker or penetrate the line of scrimmage as fast as possible.

4. Deliver the Blow or Punch – The ability to attack the blocker by neutralizing the power of his block, or by delivering a blow in such a manner that he defeats the block, or gains position on the blocker, is key.

5. Reaction – The ability to read one-on-one blocks or blocking combinations that tell you what type of run or pass while on the move, and then putting into effect the proper escape technique is most important (read on the run).

6. Defending the Run – If a defensive lineman reads run and he is at the point of attack, defeat the blocker and make the tackle (be a play maker). If
you are not at the point of attack the proper pursuit angle to intercept the ball carrier (never follow the same colored jersey). Remember, when conducting your drills, talk the shoulders this is a key coaching point.  Always keep your shoulders parallel or square to the line of scrimmage when defending the run.

7. Defending The Pass – If you read pass, always have a pass rush move in mind. When reading pass always get your shoulders out of parallel with the blocker.

1. Always line up with your feet well underneath you so that you are ready to fight pressure from any direction. The only thing that overrides the first sentence is; pass only responsibility. This can elongate a defensive lineman’s stance.

2. Always concentrate on the man nearest you, for he is the man who can block you first.

3. Never rise up to look for the ball carrier, for the blocker will tell you where the ball is going.

4. Always keep your back parallel with the ground, and you then become very difficult to block.

5. Do not go to the ground, but if you do so, get back up quickly. A football player’s ability can be equated by the amount of time he spends on the ground.

6. In defeating the trap, first know who is going to trap you. Secondly, use your head to get an “anti-trap” position. As you turn to play the trap, keep your head on your side of the L.O.S. and you will never be trapped. If you get too much penetration, then spin back inside.

7. Never allow a blocker to get into your legs; for if he does, you will go down, and on pass, this is a cardinal sin.

1. Lack of total effort – Trying to save yourself for the fourth quarter. By that time, it doesn’t matter.

2. Guessing – Not playing what you see because you “think” they are going to do something else.

3. Trying to make a tackle, or big play, without first defeating primary blocker.

4. Giving up if picked by a second blocker.

5. Not being prepared for a quick count.

6. Giving up when you think the play is over, and not going until the whistle blows.

7. Wearing unnecessary pads, bandages, tape, etc… that hinder, rather than help a performance.

9. Appearing tired, out of shape, or dragging your body on, or off, the field. 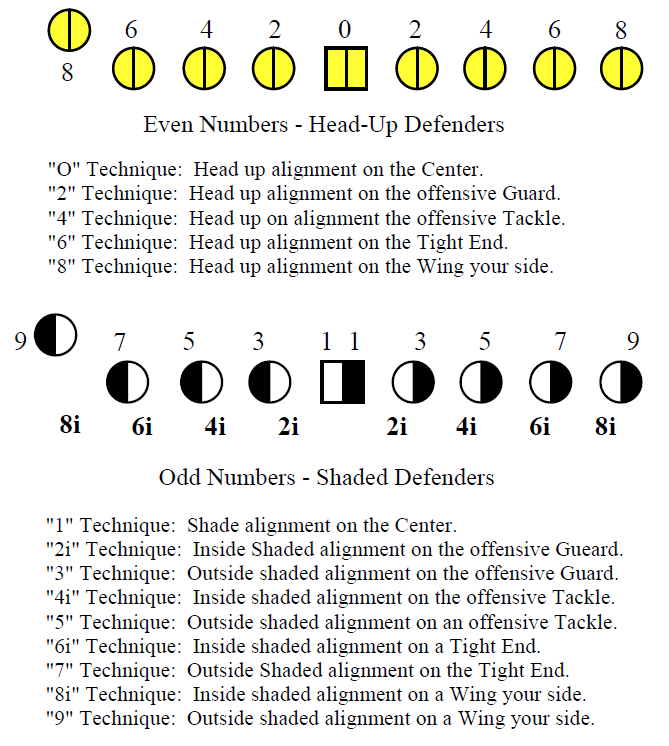