With the 4..2.5 defense, there are four types of players: defensive linemen, inside linebackers, outside linebackers and defensive backs (also called secondary players). These players’ specific positions on the field and duties during the game vary depending on the type of defense and adjustments being used as well as the kind of offense the defense is facing.

The 4.2.5 features two inside linebackers (Mike & Will) who align behind the defensive linemen or set themselves up on the line of scrimmage. Depending on the type of defensive strategy being used, a linebacker’s responsibilities can include helping to stop the run, rushing the quarterback, or dropping back in pass protection. Mike linebacker is known as the plugger or the bigger linebaker of the two. The Will linebacker is the smaller and usually the fastest because of his ability to drop into coverage.

Outside linebackers: The outside linebackers (Sam, Rover) set up on the outside portion of the line of scrimmage. They are often used to rush the quarterback. OLBs tend to be the fastest and most agile linebackers on the defense and must be able to be active in pass drops when defending the pass.

Defensive backs align behind the linebackers. Their primary responsibility is pass coverage, although they can also be involved in stopping the run or rushing the quarterback.

Cornerback: The cornerback (“CB”) lines up opposite the opposing offense’s wide receiver(s). Their main job is to cover wide receivers and prevent them from catching passes, or tackle them if they do.

Safety: A defense’s safeties (“S”) are usually the farthest away from the line of scrimmage when the play starts. Their job is to help the cornerbacks cover receivers and, if necessary, help the defensive line and linebackers protect against the run. Because of this “do everything” role, most safeties are the best all-around athletes on the defense. Safeties are designated as strong safeties (“SS or Rover”) or free safeties (“FS”).  The strong safety typically plays closer to the line, matches up against tight ends, and is more involved in the run, while the free safety typically is farther from the line and plays more of a “last line of defense” role in both the pass and run game.

As with offensive formations, there are many combinations that can be used to set up a defense. Unusual defensive alignments are constantly used in an effort to neutralize a given offense’s strengths. Some of the more familiar defensive formations include:

The 4.2.5 was made popular starting in the early to mid 80’s when the passing game started to expand using multiple spread offenses. The 4.2.5 used to be known as the 6.2.3 which was more of a run stopping defense. The evolution of the 4.2.5 allowed for defensive ends in the 6.2.3 to become outside linebackers which are also known as hybrids or over hang players. In the 4.2.5 the basic pass responsibility is the outside flat area because offenses especially spread offenses were throw the short outs and option routes.

When calling your defense using the following principles the defensive call will consist of two to five parts; the call from the side line should be made in the following order.

After making the huddle call, the “Mike” linebacker will give a verbal command of “Ready”. Once the rest of the defense hears the command “Ready” from the “Mike” linebacker they will yell “Break”. Upon breaking from the huddle the defense should get into their post huddle alignment and keep their eyes on the offense. The secondary personnel should be looking for their receivers leaving the offensive huddle and the linebackers looking for the Tight End. The first call or alert from the linebackers would be the strength call or alignment call of “Right” or “Left”.

How The Defense Is Called:

Give defense a number alert

This means based upon a four man front as our base defense; 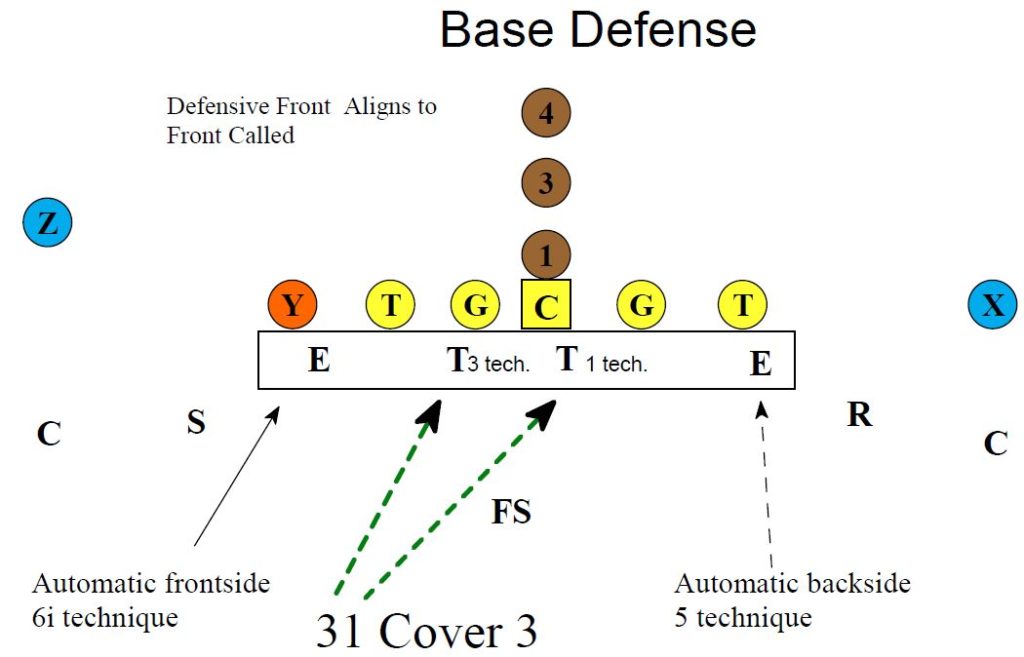 The base defense illustrated above is known as a 31 or an Over front which provides an automatic 6i technique towards the Tight End and an automatic 5 technique to the backside of the “Right” or “Left” call made in the huddle. The above illustrated defense will be the base call
for the 4.2.5.

The 4.2.5 as illustrated above is a gap oriented defensive scheme.

The following illustration will provide you information needed when discussing defender alignments vs offensive schemes. Anytime a defender aligns head-up against an offensive lineman he will be known as an even numbered defender.  Whenever we talk about a shaded defender he will be identified by using an odd number. 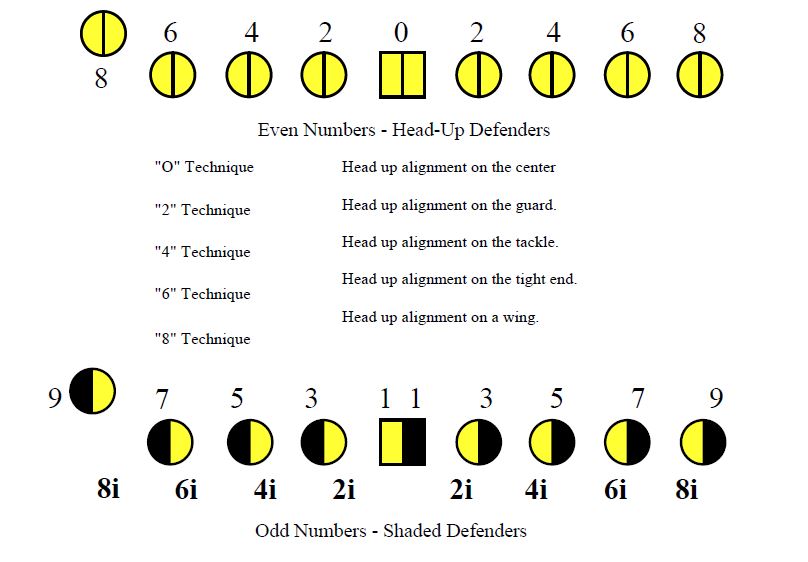 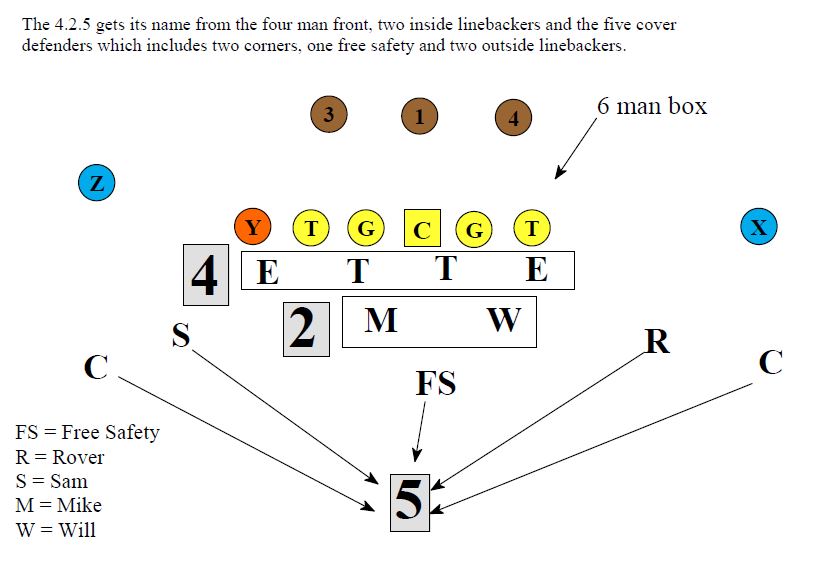 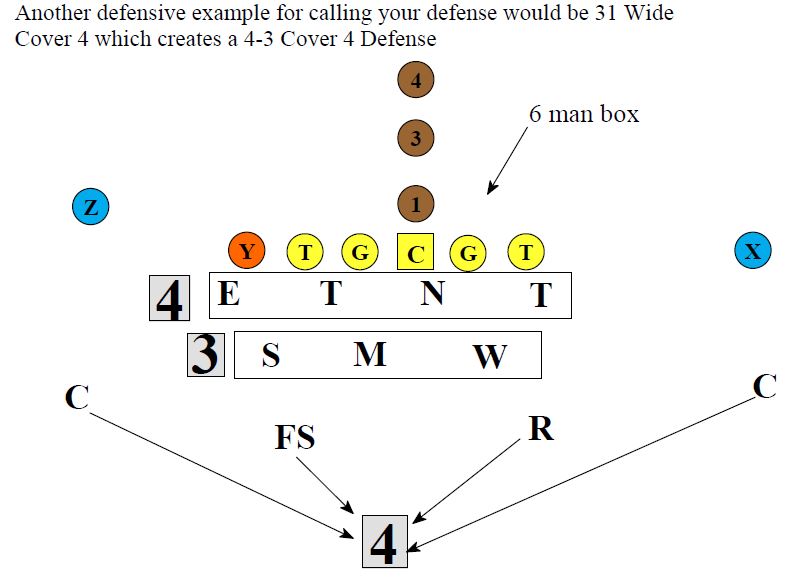 The following information will describe gap responsiblities for the 4.2.5 and how you name the area between each offensive blocker. Whenever a defender takes up a shade on an offensive blocker he has for the most part taken up a gap responsibility. An example of this would be a 3 technique aligned on the outside shade of a guard becomes a “B” gap defender. Any defender aligned on the outside shade of the tight end or is aligned as a ghost nine technique has what we call outside responsibility, this normally is contain responsibility. The following illustrations will explain a defenders area of responsibility according to his defensive alignment.

Whenever a defender is aligned head-up on an offensive blocker he is considered in a read alignment which may give him either gap to the side the play is going. 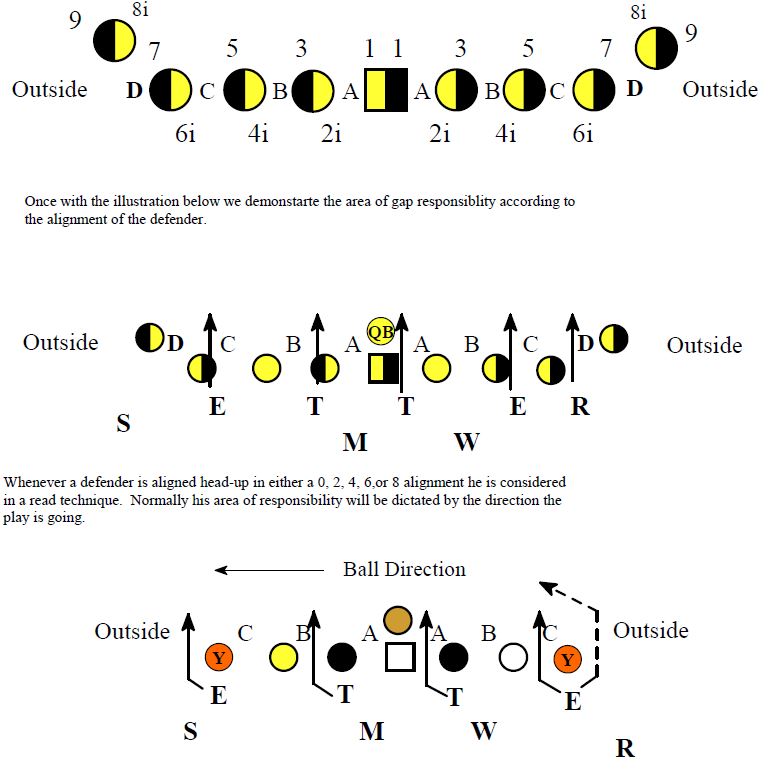