Our defensive front will play from a balanced stance to accommodate the mirror step. We will balance our stance with no more than a half of an inch of the back heel off the ground, this will eliminate from putting to much weight on the down hand. When playing from our balanced stance this will accommodate the reaction to the Base, Reach, and Down blocks for running plays. We will adjust our stances when we attach the alert word “Jet” to the defensive
scheme. The “Jet” technique puts the defensive linemen in an elongated stance with responsibility to the pass first and the run second.

The base stance with feet parallel is used vs schemes that require the mirror step as the base reaction step. Whenever playing the run from a base stance our defensive linemen will not penetrate more than one and a half yards deep, looking to play of the back heels of the offensive lineman. When playing with a base stance you don’t want to over penetrate because this sets up trap schemes by the offense. 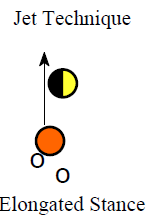 The three step escape technique will be taught to all of our down linemen.  After the initial mirror step our defensive linemen will escape their engaged lineman by their third step (3 step escape). Depending upon “Ball To or Ball Away” we will incorporate a three step escape.

When teaching the 3 step escape method, all drills must teach the quick escape method so that it follows the teachings of the defensive philosophy of running to the ball. As a defensive line Coach we will use the 5 man sled on a daily bases to reinforce this technique.