This post is the first in a 3 part series.

You can read part 2 at this link: Veer Offense Part 2

Here is the link to: Part 3 of the Veer Option

Origin of the Veer Offense

The Veer is an option running play often associated with option offenses in American football, made famous at the collegiate level. It is currently run primarily on the high school level, with some usage at the collegiate and (with slight modifications) the professional level with varying degrees of success. The Veer is an effective ball control offense that can help minimize mismatches in a game for a team. However, it can lead to turnovers with pitches and hand off option reads.

How it works
The Veer option is generally regarded as a “triple option”. It is designed as a Four back attack with one player taking a dive course, one taking a pitch course and another being a lead blocker on the perimeter of the offensive formation. The QB makes reads on defensive players and then distributes
the ball according to the defensive reaction to the offense.

A typical play proceeds as follows (we will assume that this is an “inside veer” going to the right side out of the split-back formation): the quarterback takes the snap. He then does what is called “opening up”: the quarterback goes from his two point stance, facing forward, and takes (in this situation) his opposite side, left foot and pivots ninety degrees on his right foot, extending the ball toward the sideline he is facing. The split-back halfback on the right side, who in this situation is the “dive back”, goes forward into the line to where the quarterback is and meets in an area called the “mesh point”.

This is where the idea of the Veer begins to take shape: the offensive  line has left one man unblocked here, most likely a defensive tackle (although it can be a linebacker). This man is being Read by the QB. The defender is being forced to choose between tackling the dive back or the quarterback. The dive back explodes forward, puts his arms around the ball that is being extended, but does not take it. The quarterback, in his open stance, is reading the man being veered to determine whether he will “pull” the ball from the dive back, or let the dive back take the ball and go through the hole. This is
where the name of the offense, the veer, comes from. This is just one part of the Four-part option.

If the quarterback keeps the ball, he attempts to cut up the field with the opposite side halfback, who has been running right towards the dive back’s original position. He is the pitch man. He attempts to maintain proper pitch relation to the quarterback, technically a few yards outside the quarterback and moving laterally so that the quarterback may pitch the ball as he goes down the field. This entire action does not take longer than a few seconds.

The Fourth Player in the split-veer would be a wide receiver or tight end. His job, depending on the formation, would be to block the Force player who is responsible for the flat to the side they are attacking. The offense relies on the quarterback making the proper reads, and reacting to the read (if he decides to keep the ball), turning up the field and gaining yardage. The dive back must remember to not take the football from the quarterback, rather the quarterback must give it to him. The pitch man must know to maintain proper spacing from the quarterback to ensure that the quarterback can make an effective pitch that can ensure more yardage.

Use
An example of an inside veer triple option.When an offensive system is devised for a team, the coach must take into account his players, so the veer can be applied to several situations. It can be used for undersized players so that double teams and angles can be used to block defenders. It can be used to isolate defenders and create predictable responses to the offenses actions. If a team is very disciplined it can take advantage of an undisciplined defense that does not want to execute their responsibilities precisely on each snap of the game.

The veer relies on precision, execution, and smarts, rather than an advantage in athleticism, to score points. The ability of the QB to identify weakness in defensive alignment is paramount, as the veer can take quick advantage of a defensive misalignment. The veer also can be used with great effect when the offensive line is a strength of the team.

Quarterback Rules and Mesh Mechanics for Inside Veer

The numbering system as mentioned previously for inside veer is 12 – 13. Inside veer is designed as a triple option threat when running with two backs which features a
1. Dive Back (Fullback)
2. Quarterback Keep
3. Pitchback (Tailback).

Inside Veer will be an option that allows the quarterback to read the inside jersey number of a five technique and can be run from either an openside or tightside position.

Inside Veer is designed to attack the outside hip of the playside guard. In order for the quarterback to get in a proper mesh ride he must open at a 45 degree angle with his playside foot. Like the midline the quarterback wants to reach the ball back as deep as possible for the long ride. It becomes important that the quarterback rides the ball into the line of scrimmage and that his upfield shoulder follows the ride, this helps in negating penetration.

Once again the footwork for Inside Veer after receiving the snap from center is to open playside at a 45 degree angle with the playside foot. The 45 degree angle times the mesh and ride out. The second step by the quarterback should be towards the outside hip of the guard and into the line of scrimmage, this creates the proper angle for the fullback running through the mesh. The second step into the line of scrimmage helps negate penetration by the defense and helps get his path after any pull read downhill and to the inside jersey number of the five technique. Must not allow the quarterback to bubble his path after the pull read because this will allow the five technique to slow play the inside veer thus, allowing the five technique to string the play out.

The mesh point on the ride usually comes off the front hip of the quarterback. What this means is that if the ride or mesh goes past the front hip of the quarterback it will probably turn into a give to the fullback. It’s important that the fullback maintain a soft pocket while running through the ride, this is accomplished by keeping his eyes up and continues to show his jersey numbers to the linebacker his side. 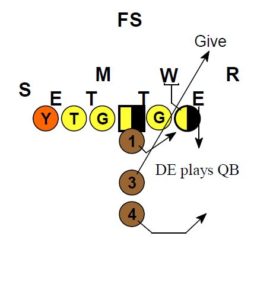 Whenever running Inside Veer into a five technique with a one shade this is considered best case scenerio for
running this play. The quarterback will read the inside jersey number of the five technique, if the inside jersey number goes upfield then the quarterback will give the football to his fullback. The reason this is considered the best case scenerio is because of the ability of the tackle to get a good inside veer release.

The tackle as he inside releases will be asked to “Pick Grass” a term that is used for getting the backside
shoulder reduced harder, keeps from dragging the shoulder. Whenever the tackle attempts to pick grass and
can get his backside shoulder reduced it helps the five technique to squeeze harder on the tackles veer release
inside thus making him more apt to take the dive.

The quarterback should ride the mesh into the hole and off his front hip as he keeps his eyes on the inside jersey number of the five technique. Remember the ride into the hole becomes the most important technique that the quarterback uses because it makes the defender commit one way or the other and keeps him from stringing the option out. 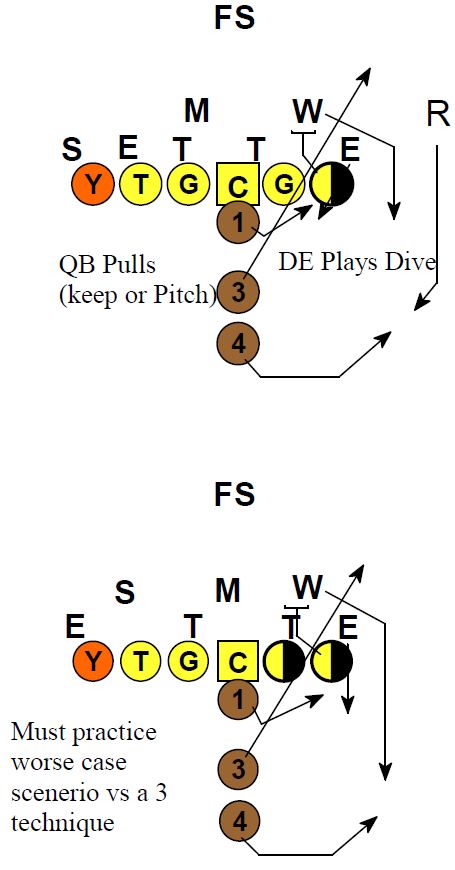 Whenever the quarterback gets a pull read and the defensive end or five technique attacks the dive his next read should go to the scraping linebacker. If the inside veer release tackle can seal the playside linebacker then the eyes of the quarterback goes to the outside invert.

The quarterback must practice the mesh with the fullback against a three technique, this becomes a worst case scenerio. Fullback can either veer outside or back inside depending upon the three technique stretching or not.

Blocking Adjustments for Inside Veer Openside 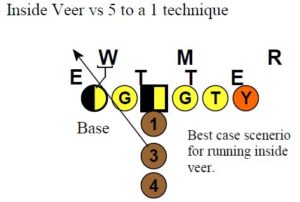 The best case scenario for running inside veer is to a five to a one technique. This situation allows the tackle to get a good inside veer release to the playside linebacker. The mesh and the ride for the quarterback and fullback is easier to establish.

The alert call by the tackle is “Base” because he doesn’t have to work a combo with his guard thus, allowing the other blocks to counter rotate away from the play. 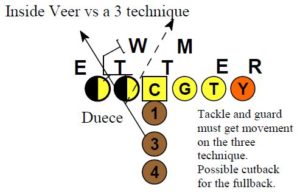 Inside veer to a three technique becomes worst case scenario and one that needs to be practiced against numerous times. The problem posed here is the three technique stretching outside if the tackle and guard can’t get him washed down inside. With this situation the fullback must be able and taught to cut backside of the three technique if he stretches as shown in the illustration.

Must be able to give the inside veer to a three technique a lot of reps. 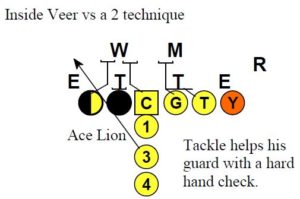 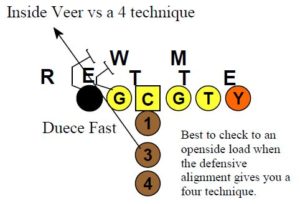 Vs a four technique you will get a duece fast call because of the location of the defensive end aligned head-up over his tackle. This type of alignment is why we use the “Option On Me” for best option call which if running to the openside here in this illustration you would be better off running the openside load thus, checking out of inside veer.

Against a four technique the guard must come over to seal the inside shoulder of the defensive end thus, creating a tough mesh and ride for the quarterback and fullback.

You can read part 2 at this link: Veer Offense Part 2

Here is the link to: Part 3 of the Veer Option