The midline option has become one of the best plays in option football for making the defense have to defend the mid-point of any offense especially under center. For the most part 95% of all running plays are run from the outside hip of the guard to the outside area of the tight end and openside tackle thus, the majority of the drill work that takes place during game week defensively is done downhill and toward the outside linebackers to help support the outside run. The midline makes the playside linebacker and free safety have to to check the mid point of the defense before reacting to the type of play being run. By making the playside linebacker check the mid-point of the offense helps your offensive line gain a step when tracking their linebackers on any given assignment.

You want the midline in your offense so, defenses have to adjust and defend the mid point of the offense. The best way to defend the midline is not to give the offense a 2 or 3 technique to run that play so, you start to see reduced defensive fronts which primarily is an under front or a reduced eagle. The reduction usually gives a 1 technique and when running midline towards a 1 technique forces the midline to turn into a veer scheme by the fullback or dive back. But, when defenses reduce they tend to start to give up other areas of the field when defenseing the midline and that area usually becomes the perimeter. Thus, by reducing defensive fronts to defend the midline inside veer towards the openside and the load option towards the tight end become great plays.

The following section will describe in full installation and discription the midline from multiple formations, motions and backfield sets. A point of reference when installg the midline is that you will always want two offensive blockers tracking the playside linebacker to free safety. One of the
blockers will always be the playside guard with the second tracker or blocker the tight end, running back, tackle or a wing back. Use your imagination to make the play fit your formation philosophy.

As you will find there are several ways in which a defense can align to force certain reads by the quarterback. Defenses can defense the option game in ways that will dictate who runs the football so depending upon who your best athlete and runner is is how they will respond to defending you. A way to adjust to defensive schemes that are trying to force you to give to a predetermined offensive player you might consider checking into best option on the line of scrimmage and also using motion in your scheme to see how defensively they will adjust (force the defense to change responsibilities on the move).

The midline option read is considered one of the easiest options to install due to the closeness of the read. Our midline option is called 10 or 11, we will want to run the midline towards a 2 or 3 technique only for best results and for best midline mechanics. On the midline line option we want to teach our quarterback to read the inside jersey number of the two or three technique (defensive tackle).

The footwork we will teach our quarterbacks will be to push off the playside foot. We will take when pushing off the playside foot a 45 degree angle step with the backside foot. Once the quarterback pushes away from the read he then will want to step at six o’clock with his playside foot reaching the ball back to the fullback as deep as possible. Also, by the quarterback pushing away from the read it will help in getting out of the way of the fullback who takes a path at the mid point of his center. The following illustrations will help to demonstrate the midline mechanics by the quarterback. 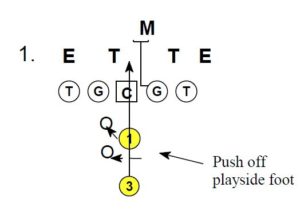 In illustration # 1 the quarterback will push parallel to the line of scrimmage with his backside foot.

You push away to get out of the way of the fullback. 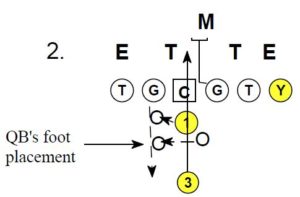 In illustration # 2 the quarterback will after pushing off his playside foot, step at 6:00 o’clock getting his feet perpendicular to each other.

Quarterback will reach the ball back as deep as possible. 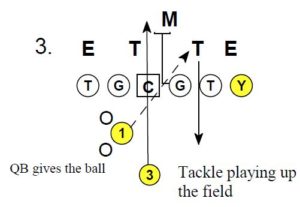 Illustration # 3 demonstrates the eye location of the quarterback as he reads the 3 technique.

The quarterback wants to get his eyes to the inside jersey number of his read as fast as possible.

If the inside jersey number goes upfield the quarterback will give the football to his fullback.

After giving the ball the quarterback should carry out his fake as if running with the ball.

Carrying out the fake by the quarterback is a key coaching point and should always be emphasized. 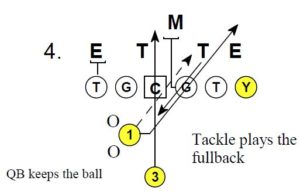 Illustration # 4 demonstrates what the quarterback would do if the inside jersey number of the tackle closes down inside as the 3 technique attacks the fullback.

Once again the inside jersey number of the 2 or 3 technique dictates the give or pull read. The give read happens when the quarterback sees the inside jersey number coming down to attack the dive or he can see the white of the number moving towards him. By reaching the ball back as deep as possible for a longer ride invites the down defender to make a decision one way or the other such as, he decides to play the quarterback. The key to keeping the defender from playing soft in the hole is to keep the quarterbacks momentum moving downhill. If the ride is shorten then the defender plays softer, if the ride is longer it usually brings the defender towards the dive (Fullback).

Another key coaching point with any dive mesh is to tell the running back to run with his eyes and head up as he runs through the hole. Whenever the back drops his eyes and head as he goes through the mesh it makes him clamp harder on the ball, if he runs with his eyes and head up it makes for a softer pocket, a smoother exchange and a better mesh between the fullback (dive back). Something that I like to tell our backs as they go through the mesh and ride is to show their jersey number to the linebackers this to, will facilitate a softer pocket and mesh ride by the quarterback. Whenever the quarterback gets the give read have him continue to carry out his fake whenever possible a point of reference here is this I have our quarterback whenever possible to carry his fake out 15 yards down the field. Also a point to remember if the 2 or 3 technique continues to play up the field run the trap.

Midline vs. a 2 or 3 Technique

10 – 11 Jill: After quarterback sees that the triangle is intact towards the open side he then looks towards the tight end side for his next option. The area over the tightside guard is the area he will consider for running the midline option or 10 & 11 Jill. Quarterback needs a 3 or 2 technique for best results. Midline is best run towards the tight end because of the blocking scheme that is afforded this play. 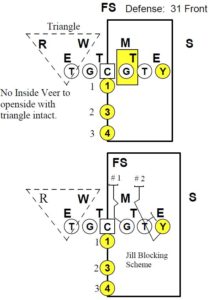 The midline is considered the easiest option for the quarterback to read because of the location of the three technique and his ability to get his
eyes on the inside jersey number.

Remember, no matter what your backfield set is when playing with a tight end or slot you must have two trackers for the playside linebacker and free safety. The midline must be a play we perfect because it will force defense to reduce in order to defend this play. When defending the midline it will force defensive fronts and outside inverts to reduce, thus setting up the outside option game.

Our base scheme for the midline is the Jill fold scheme which puts the playside tackle blocking out on the seven technique and the end drop stepping inside to track the playside linebacker to free safety. It should be noted that the reason this scheme is called “Jill” is because of the fold by the tackle and tight end. Anytime you have a combination between two adjacent linemen and the inside blocker blocks out and the outside blocker drop steps inside is known as a “Jill” scheme. If you had the outside blocker going first and the inside blocker drop stepping and going outside the down block then it would be known as a “Jack” scheme or fold. 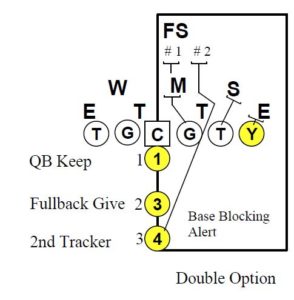 With the “Jill” scheme we will always have the ability to check the blocking rule to a “Base” alert whenever the tight end and tackle can no longer work the “Jill” fold together. The tight end will be responsible for the “Base” alert if faced with a nine technique and no one covering up his tackle. With the “Base” alert the tackle will now take first threat over the top of him. The “Base” alert puts the tailback becoming the second tracker along with the playside guard. This is know as an “Army” scheme, tailback tracking middle linebacker to free safety.

The “Base” alert turns the “Jill” scheme from a triple option to a double option based upon the tight ends alert.