Coach Stewart (All Access Coaching) has been a football coach for 27 years, 22 at the high school level including 16 as a head coach.

At the time I was feeling pretty confident in my Wing-T knowledge.  We were coming off a 12-1 season, setting all sorts of school records in my 14th year running the Wing-T….

I had watched hundreds of videos and traveled all over the country.  I learned the Wing-T in 2003 from the smartest football coach I have ever heard or met…Randy Blankenship.

…But talking Wing-T with Holmes made me feel like the child Anakin Skywalker listening to Yoda….I had just met a coach who was at Blankenship’s football IQ level.

In fact, Blankenship sat in the front row of Holmes’ talk in San Francisco and took notes.

Because Roger Holmes is a smart football coach.  3 state title games and 240 wins in football-crazy state of Georgia.

But if you don’t live in Georgia how can you ever learn from Holmes?  How can you hear him spout out answers to every defensive adjustment? This is a coach who doesn’t use a play sheet on Friday nights because he is Dustin Hoffman Rainman on Friday nights.

The key, the glue, that holds Holmes’s entire offensive system together is his blocking system.

This blocking system can help any coach, I don’t care what offense you run…but you need to look past the “this guy blocks this guy”…you need to peel the layers of the onion back and examine the system, the communication.

Because to have all the answers to anything requires multiplicity…versatility…

But football is played by teenagers…

Holmes learned the blocking system as an assistant under college Hall-of-Fame legend Herschel Moore.  Belichek under Parcells…Saban under Belicheck….Holmes under Moore.

It all starts by assigning each lineman and back a letter to determine who pulls in the play call.  Combo blocks use the first letter to decide who kicks out and the second letter is for the man leading through the hole.

The letter “G” tells the Guard to pull and trap the first defender from the 4-man outside. 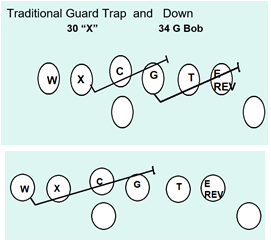 The “BOB” tells the wing to go outside’ End  to block the inside backer.  “Back Outside to Backer”

If the play Call involves the Letters: W, X, Y or Z the play side linemen will follow the “Post Lead Principals.”…..which involves the Man at the Called Hole and the two players to the outside of him.

o   Lead Block the first man inside him.

o  Load: (Look for 2 LB’s between the call man and the next 2 adjacent men.

o   Influence pull to outside or pass set to get DL upfield.