We will run misdirection plays just enough to make our opponent have to practice them or when we get defenders too over eager and want to get too much upfield penetration. Secondary pull schemes are broken down into two categories. 1. Trap 2. Counter

All our combination blocks are designed to zone playside. Whenever going to a secondary scheme it puts us into a man rule scheme towards the play and we will always zone away from the play called. It should be noted that linemen will make their necessary line calls at the point of attack with all others coming off the initial call. Some plays will have non-verbal communication, but calls can still be used to reinforce any offensive lineman’s blocking assignment.

Trap schemes are best run whenever you have a defensive scheme that puts three over three or four over four. This means three defenders over the top of three offensive
linemen. With the illustration shown to the side you get a three over three situation which allows for a good blocking scenerio.

Whenever pulling we will use color alerts to let the backside guard know where the person to be trapped is located. We have what we call short (white) and long (black) pulls. Prior to the ball being snapped the playside guard will alert white or black depending upon the location of the down defender, once the guard makes his alert call other linemen can echo the same call to make sure the backside guard hears his alert.

The technique that the pulling guard uses to accomplish his pull is to dropstep on the snap of the ball with his playside foot, what will keep the guard down and not let him rise when opening up is what we call “Slap The Dog”. When the guard dropsteps he will take his playside hand and play as if he is slapping his dog or should I say the wall, this keeps him down. So, take the playside hand and open up by slapping the dog with the back of the hand, don’t throw the elbow.

Once the guard gets on track he wants to make his aiming point the inside hip of the down defender. A key coaching point here is for the guard on contact to allow his base to widen or what we call explode the base, this helps prevent defenders from wrong arming the puller trying to spill the trap outside.

The counter scheme can be run from several different formations and backfield sets. The counter takes advantage of defenders who are over running plays. The counter is used to keep defenses honest and to make defenders stay home and defend their assigned areas. The counter actually becomes two plays in one depending upon the end man on the line of scrimmage. If the EMLOS plays up the field the counter turns into trap, if the defender plays down as if to spill the play outside then it turns into counter sweep.

When running 42 or 43 Counter you will get a backside guard pulling along with a fullback as the second blocker on the pull. 42 -43 GT pulls the guard (G) and tackle (T). When running 42 – 43 we will always have two pullers tracking playside. The two pullers are responsible for EMLOS and the playside linebacker. The following illustrations will demonstrate how to install these schemes. 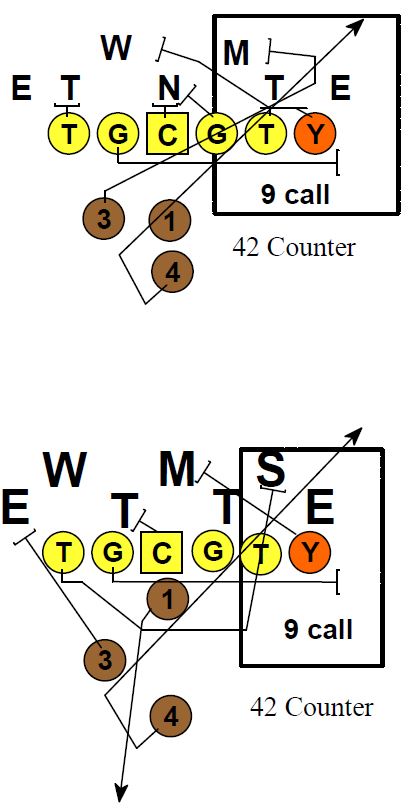 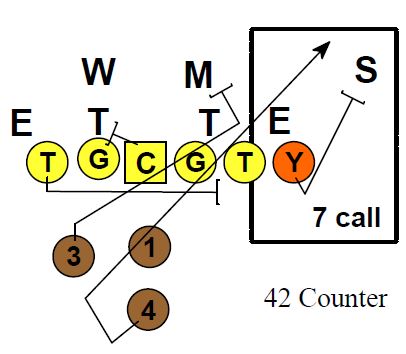 The rule for blocking the counter schemes on the perimeter goes as follows; take the easiest path, if faced with a nine technique then inside release to middle or backside linebacker. If faced with a seven technique on the inside shade of the tight end then arc release to the outside invert.

The initial steps for both the guard and tackle if running (GT). GT stands for guard and tackle, the backside guard will dropstep with his playside foot and then with his  backside foot stepping parallel to the line of scrimmage and then begin to gain depth to see how the EMLOS is going to play him as the defender attemps to play the kickout block by the guard. The guard starts to climb to a depth of no more than five yards, this is called gain depth to gain vision. If the EMLOS closes down inside then the guard will quit climbing and work to log the outside hip and jersey number of the defender, this turns the play into counter sweep.

If the EMLOS starts to climb up the field with the guard this means the defender will take the kickout block on with his inside shoulder thus turning the play into counter trap. Once again if the EMLOS plays down inside the guard will attempt to log the defender, if the defender plays upfield he then will kick him out and the play runs inside.

When running the counter into the tight end he will always give an alert of a seven or nine call, this tells the guard of the location of the EMLOS and the probable technique that the defender will use. A seven technique will for the most part always work to spill the counter outside whereas a nine technique will try and contain the play by keeping it inside.