Traditional leadership models, often hierarchical in nature, are changing and evolving.  One of these models is the captain model, which tends to be too rigid and centralized, especially for modern-day athletics.  Even the military, where the shift to special operations teams is prevalent in fighting today’s wars, is not organized with a traditional commanding officer, top-down hierarchical model.  Instead, a group of leaders giving input and making joint decisions is the way that these elite teams have the required flexibility and synergy to make them successful in high stakes situations. Yes, there is an ultimate decision maker, and there always has to be, but many trained and competent voices are better than just one solitary one.

The key is to develop many leaders in a team who can be incrementally given more responsibility and decision-making ability as they are exposed to leadership principles.  Given ample opportunity to apply these principles and grow in confidence to make decisions, they are then able to take action in critical moments.

Most athletics teams start developing leaders in their junior or even senior year, depending if they are a fall or spring sport, often expecting these captains to have learned by osmosis and with limited training:  maybe a book or two and some conversations with the coach.   It is presumed that with this limited information, they will be able to carry the burden of knowing how to best influence their teammates and lead the team.  In most cases in my experience, this is just too much responsibility for one young person to have.  Yet, the model of having multiple captains does not make sense either because it can actually cause the opposite effect than intended by creating a type of bystander effect of sorts. .  Shared leadership on the other hand is not exclusive or limited in its numbers and creates increased buy-in and commitment.  Think of it as leaders in different areas of strength who can pass the baton to each other and support one another’s leadership efforts.

According to Jeff Spahn of the Leading Leaders consulting group, “the emerging question in leadership today is not about how to develop leaders, but rather how does a team of leaders lead each other.”  He goes on to say that this goes beyond collaboration and is more how people actually lead and follow simultaneously. This sounds like shared leadership.

In his best-selling book Linchpin, Seth Godin shares the example of the fast and complex Japanese transit system.   It operates on schedule and on budget, not by top-down directive, but by a large pool of empowered employees making the best decisions as the challenges present themselves. “Letting people in the organization use their judgment turns out to be faster and cheaper—but only if you hire the right people and reward them for having the right attitude.”

It’s not rocket science; it is basically a way to include ALL your players and personnel in the leadership development and implementation processes.  Why limit it to just a few hand picked players, who will undoubtedly be looked upon as favorites?  Why leave it to chance?

If you wait until players are upperclassmen, they will graduate before they can learn their leadership craft through both successes and mistakes, and unfortunately, your program will miss out on the full impact they could have. We need to start to expose, train, and encourage all of our players to lead, yes, even as young freshmen.  What is the worst that could happen? Even if they choose to pass on the call to lead, at the very least they may become better followers since they will better understand the difficulties and challenges associated with leading.  In other words, this is a clear way we can not only teach leadership principles but also create buy in and a higher level of team cohesion and common purpose.

The idea that there can be too many “chiefs and not enough Indians” or too many “cooks in the kitchen” is a common objection to this model.  Part of the key in teaching shared leadership is exactly that they can also learn how to become better followers and more supportive team members when it is not their turn to lead or in an area of someone else’s strength.  Personally, I would rather have too many leaders on my team, all pulling in the same direction, than not enough. 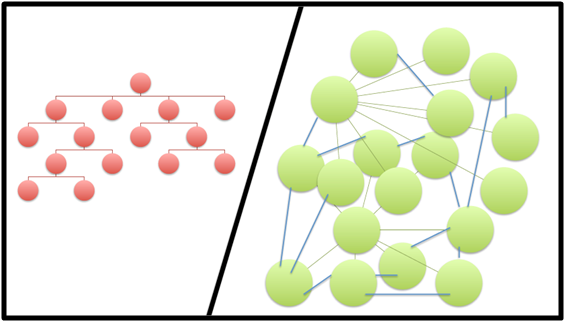 How does Shared Leadership fit in to this?

SINGLE LEADERSHIP: One leader figure (coach and/or captain) and many followers results in control and predictability.  Also creates average results, and high risk of monotony and burnout.

SHARED LEADERSHIP: Leading and following simultaneously in a true shared responsibility model, leveraging the depth of experience, expertise, and oppositional points of view of every member required to truly create and execute at a an optimal level. The openness and humility of all involved to lead in this way creates a higher level of performance, team unity, and better results.

Why is it better?

The traditional leadership hierarchical model is quickly becoming archaic.  Today’s athlete wants to know the why behind what they are being asked to do.  When we let them in behind the curtain and start to show them the inner workings of team life and what is required to lead, some of the following benefits can occur:

Like any change in paradigms, the most difficult aspect will be to navigate the team through change.  You may receive some resistance from your players, especially from those who believe it is their “due time” and have an expectation to be captains.  Of course, these are the people who need to learn the most about true leadership principles, including the servant-leadership model and not the self-serving leadership fallacy (the difference between these two is stark: being a leader is not about what I can gain, it is about how can I serve as a leader for the benefit of others and the team).

You may have to overcome the biggest obstacle of all which may be your own leadership dogma.  It usually sounds like this: “This is the way it always has been done” or “I was a captain” or “my team had captains, and it is the right of passage to seniors.”  I just want to encourage you to ask yourself … is this the best model for today’s athletes and for their current and future development?  Even if it has worked for you in the past, is it working now?  Will it work in the future?

Ideas on how to implement it

Shared leadership is not about competition, ego, or jockeying for position.  It is instead about collaboration, cooperation, and a shared purpose and direction.

It is about servant leadership and doing what is best for the team, even when it may not seem like it’s in my best personal interests.  It is servant-like, team-first oriented, but it is also driven, focused, and purposeful action.  Finally, it also requires the attitude of knowing when and how to follow as well as when and how to lead.  This ying-yang type of balance is what makes this type of leadership environment difficult to attain but so powerful when it is reached.

© JPF Coaching & Consulting (Posted on the Coaches Toolbox by permission)