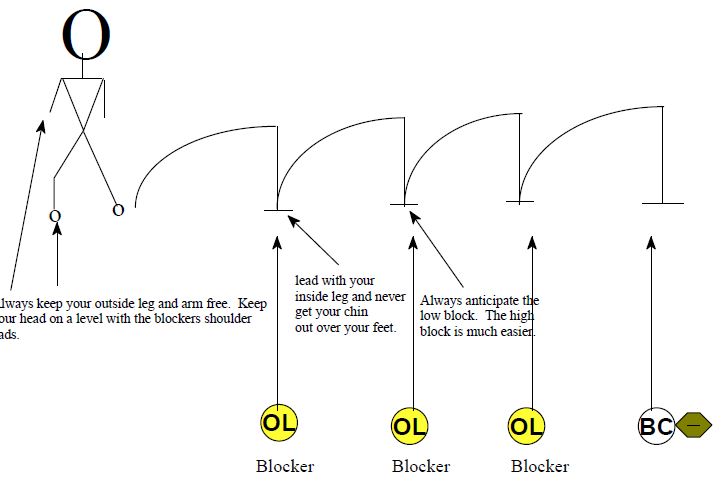 There are three basic reasons players are knocked off their feet:

1. They look over the top of the blocker to the ball carrier.
2. They put their hands on the blockers back.
3. They get poor body position – Example: Outside leg up or chin over their feet.

When defending the stalk block or cut block, keep both arms extended and locked at the elbows, getting the hands on the shoulder pads and giving ground. In playing the kickout block, meet the blocker with the inside arm flipper keeping the outside arm and leg free and give ground. In playing the stalk block, stay on the blockers outside shoulder using a stiff hand-shiver on the front of the shoulder pads and if the blocker maintains contact, slide the hands up to the throat at full arms length and maintain outside leverage.

Open side or Weak Corner or Tight Safety – this is the first drill in teaching funneling receivers. You want to work parallel, getting your body in front of the receiver and not to reach for him. Initally you do not want to play the receivers as tough. You want to obsorb the receiver. All of the movement should be parallel. You don’t want to step up or strike out as this is what causes you to miss the receiver or get off balance and not be able to cover your zone. You must keep your feet moving, do not reach out but, get your body in front of the receiver. When this position is gained, then you will take hom on tough. Whenever you get an outside release, force the receiver wide and look for the next receiver such as number two receiver coming out. Make the quarterback throw the ball to the flat receiver. When an inside release is used, close but do not get hung up and get caught inside. Movement should always be lateral. 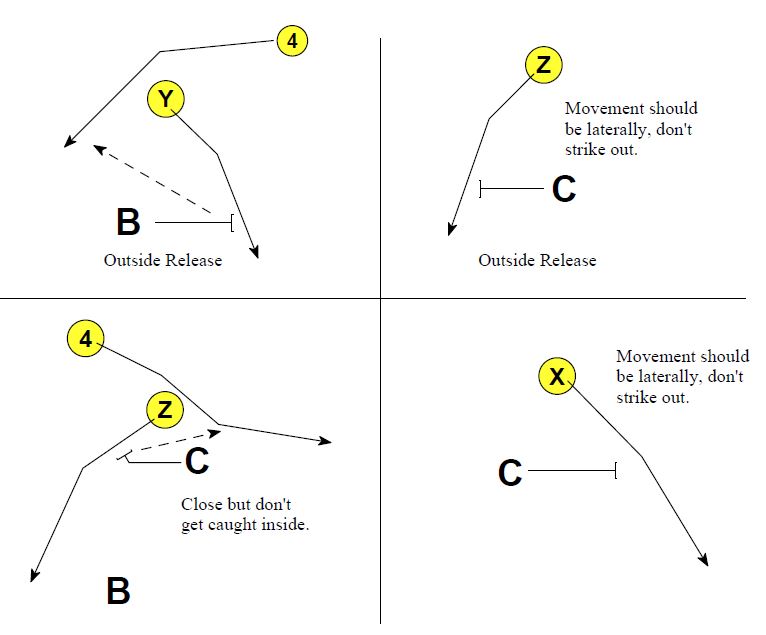 This drill designed for the Tight and Open Safties and open side Corner – Depending on the coverage, the defender should learn to funnel the receiver, and then get depth to help the Safety, or Deep Back, while keying the number two receiver. If the receiver goes deep, look for number two running to flat area.

4. Funnel and Flat Drill
Funnel and flat drill will help Corners and Safeties to collision an inside release, and then get back outside when the second, or number two receiver, threatens the flat area.

Click here for part 2 of Defensive Back Drills and Techniques